By Katherine SaltzsteinDueling views:Comment:  Naturally, I side with the presevationists on this issue. Once you develop something, it's almost impossible to undevelop it.

Below:  "Navajo water walkers, Save the Confluence, are struggling to protect the pristine region at Bodaway Gap, Arizona, the Confluence, on the Navajo Nation, where the Colorado and Little Colorado Rivers meet. They walked to Window Rock this week to protest a plan to develop the area for tourists. Those leading the assault on the Dine' sacred area include former Navajo President Albert Hale who resigned during a financial corruption probe and was appointed to the Arizona legislature by the governor to fill a vacancy." 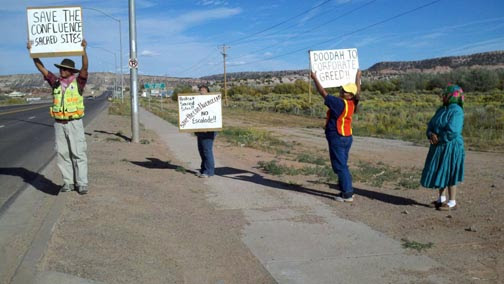