For starters, who cares what the team intended? Anyone accused of saying something racist will claim they didn't mean any harm. Unless they beamed their thoughts into people's minds, their intent is irrelevant. Only outcomes matter, not intent.

Also, who cares how the team uses the "Redskins" slur? The word is an ethnic slur on its own, by definition. Regardless of how the team spins it, the word itself conveys a message.

Even when team does nothing, the word is forming a link in people's minds. It's suggesting that Indians are dirty, half-naked, primitive people of the past. I.e., savages.

Finally, the coalition hasn't done anything except regurgitate the white team owner's rationalization. Did it investigate how others define and use the word "Redskins"? Not according to this article. Taking a white man's word that he didn't mean any harm is like taking a crook's words. If we listened to criminals, not a single person would be in jail.

For more on the subject, see Campaign Against Nepean Redskins. 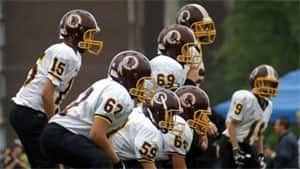