Part Cherokee in The Mindy Project

The season premiere of The Mindy Project, titled All My Problems Solved Forever (airdate: 9/17/13), guest-stars James Franco. He plays a doctor filling in for Mindy while she's in Haiti.

At one point, he comes up behind her. The following exchange occurs:The implication is that Franco can move stealthily because he's part Cherokee and has inherited the Native ability to sneak up on people. Which is stereotypical, of course.

There's also the perennial problem of people identifying themselves as part Cherokee. Franco's character could've laughed at himself for uttering such a cliché, but he didn't.

And since the Cherokee were one of the "Five Civilized Tribes," they're about the last Indians who would sneak up on people. Did his ancestors learn to walk quietly so they wouldn't disturb the cotton pickers on their plantations, or what?

Her shows tend to have an underlying message of tolerance, so her political views aren't necessarily a issue. But this particular exchange was a klunker. 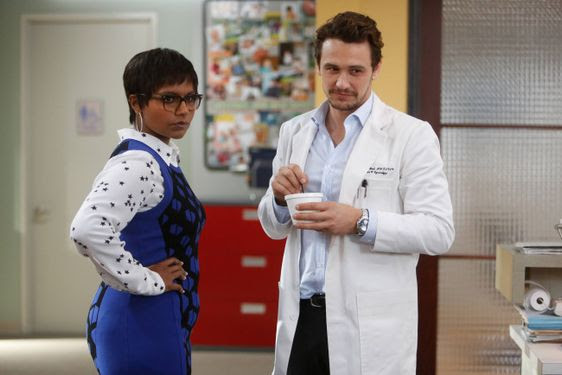