It seems we're headed back to the Fifties: the era of McCarthyite name-calling and Saturday matinees. Whether it's in political or creative circles, Native people are getting demonized again.

Because of the Abramoff scandal, pundits have all but called Indians mobsters and hoodlums. Some have implied they're subverting the government just like Communists. A few have suggested returning to a policy of terminating tribes and forcing them to assimilate.

Overseas, we're treating Iraqi civilians much like we did the Indians. Pundits have labeled Iraq Indian Country, as if we're still protecting the fort against natives on the warpath. One US official referred to Osama bin Laden and his "Indians"; columnist Liz Smith compared Indians to terrorists.

And what is the whole immigration debate but a jeremiad against brown-skinned people? When you hear ridiculous claims like "the English language is threatened," "our values are under attack," or "they want to take back the Southwest," you know there's more than a policy dispute going on. For much the same reason, we're dissing leaders such as Bolivia's Evo Morales (an Aymara Indian) who oppose US interests and tout indigenous rights.

On the big screen, we're seeing a similar trend. In Sahara (2004), three white adventurers (if you count Penelope Cruz) fought an angry army of blacks and Muslims. In King Kong (2005), three white moviemakers fought an indigenous tribe of crazed killers. This year we have End of the Spear (below) and Pirates of the Caribbean:  Dead Man's Chest. 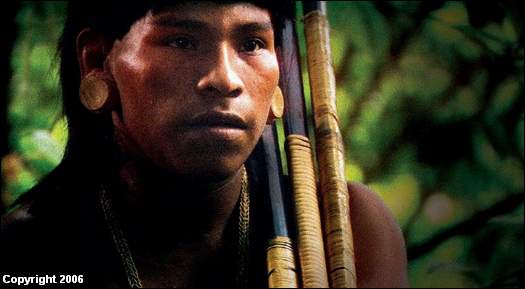 how can you consider end of the spear political. this was based on a true event. where tribal people killed anything and everything. if that happened in America would we allow this group to continue just because we don't want them to change who the are. no we throw them in jail and force them to change or we sentence them to death. so when a group of people do it somewhere else who are you to say that murder is OK for them. cause its not.

I'm not sure what End of the Spear's being based on a true event has to do with it. That condition tells us nothing about whether the movie has political dimensions or not.

In fact, in this posting I didn't say End of the Spear was political. But pretty much everything has political dimensions, including Spear.

I touched upon the movie's political issues in my long review titled Spear Gives Viewers the Shaft. For instance, I quoted a website that said:

In the late 1960s the oil company, Texaco, approached the Ecuadorian government hoping for permission to drill for oil on Huaorani land. Saint and Dayuma became a key part of the following massive displacement of hundreds of Huaorani.

In the same review I addressed the Waodani's warfare at length. Basically, I said the few killings shown in the movie didn't match the exaggerated claims made in the movie.

"Warfare" is the operative word here. The Waodani were arguably fighting wars against their traditional enemies and the encroaching Ecuadoreans.

People generally don't go to jail for killing people during wartime. To verify this, look at how many American soldiers we've jailed for killing Iraqi civilians: roughly zero.