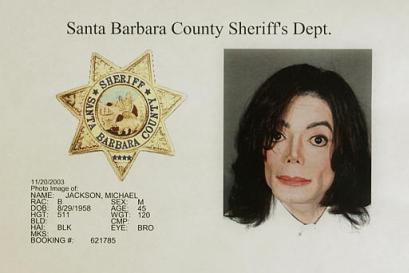 "You can see the features in blacks from Michael Jackson..."

I'm not sure what this pale noseless freak resembles anymore, but I suspect it is not a human species. Whatever his ethnic heritage was, Jackson despised it enough to order all traces removed of it.

Now, now. Let's not take too many cheap shots at Jackson's expense. Hasn't he suffered enough?

...all of it self-inflicted.

No, Rob, Michael Jackson hasn't suffered enough. He's a sick man who has refused help. And, though legally unproven, he's predatory around children.

And that photo of him you posted is enough to give me nightmares....

Writerfella here --
Principally, it was the 'Five Civilized Tribes' that kept Black slaves and intermixed themselves with Caucasians, and now in modern times are having to deal with the 'Freedmen' and whites among their numbers.
Herwith, the text of a newspaper item from Oct. 9, 2006:
"Indian Blood Requirement Election Called."
Tahlequah, OK. -- Members of the Cherokee Nation will vote on Feb. 10 to determine whether non-Indians should be excluded from tribal membership, Principal Chief Chad Smith decided Friday.
His decision came one day after the Supremem Court of the Cherokee Nation determined that a citizens' petition requiring that tribal members have Indian ancestry has enough signatures to go to a vote of the people. Historical tribal rolls, which include some non-Indians (read: Freedmen and whites -RLB), now determine membership.
The Cherokee Nation has more than 250,000 citizens.
"The people have spoken clearly, demanding the right to decide this Constitutional issue for themselves," Smith said. "Some of them believe that you should have to be Indian to be in an Indian tribe.
"Others think that we should have a policy that allows descendants of non-Indians who were affiliated with our tribe in the past to have citizenship. Regardless, this is obviously an issue that demands the attention of Cherokee voters."
In March, the Cherokee Nation's highest court reversed a previous decision and ruled that the Cherokee Nation's Constitution allowed citizenship for non-Indian descendants who were listed on the tribe's historical rolls. (NOTE: the decision that was reversed concerned the Freedmen and white 'Cherokees,' who were to be excluded from tribal rights and privileges.)
What is the old statement about hindsight's visual acuity? Seems that the Cherokees made their Trail of Tears but now do not want to lay on it.
All Best
Russ Bates
'writerfella'

Michael has suffered enough. His "predatory around children" behavior is not legally proven because it was probably innocent. He OBVIOUSLY had several personal issues that separated him from most social norms. No one will ever know what it is like to live a life such as his, but the man was so charitable and conscious...just listen to his music and watch some interviews.

Please don't continue to project sick thoughts about what it 'looks like could have happened' when there is no proof. A lot of Americans tend to have repressed sexual thoughts that are often projected onto others. Especially people as naive as MJ.

There just isn't enough evidence to suggest foul play. And think about it, all of these families were looking for money, if your child was molested would you be out for money or blood? I know my answer.

Not a Sioux, is it really self inflicted when you are forced into superstardom by an overbearing father at age 7, one that abuses you and makes you hate yourself for your "big fat nose"among other things?

Is it really self inflicted when you have a disease (Vitaligo) and you are forced to be in the lime-light when the only industry you know requires your appearance to be marketable?

Is it self inflicted that people such as yourself, I presume, judge and blog about you without even spending more that a few minutes analyzing you?

And to come out as giving and positive as his was is amazing.

Shame on you for spreading this kind of negativity and hate about a dead man. I hope you think about what you are putting out into the world, so that when people remember you it will be more positive than what I see on this site.