June-July Stereotype of the Month loser 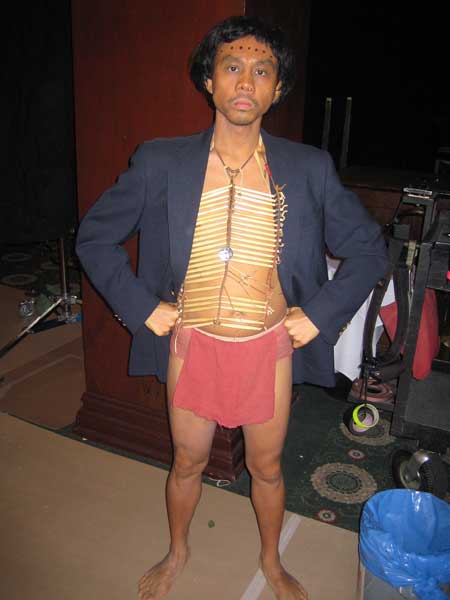 Shorter Dishonorable Mention: the damn Indians are stealing the land back from us!!!!

Are you being sarcastic, o cranky one? In most cases, Indians are buying back the land. That is, the land they owned before we took it from them. I don't see anything wrong with that.

If you click on 'Crank's link and check his blog, that should answer your question about the sarcasm.

"Are you being sarcastic, o cranky one?"

I was being extremely sarcastic, yes. Sorry, I realize that sarcasm doesn't always translate smoothly across the interwebs. I should have been explicit in stating that I was summarizing Elaine Willman's arguments in my usual smart-assed manner.

Writerfella here --
Not being much of a pro football or basketball or even baseball fan, writerfella only has seen the Bud Light 'Zagar' spots during golf broadcasts. To my mind, the ads contrast 'civilized' behavior with the tribal roots of such behavior, representing therefore a dichotomy between what people believe they are and what they really are. Not what they 'were', mind you, but what they still are, though the customs somewhat have become more refined.
The same contrast could be indicated by saying that tribal women wore furs and feathers, while coloring their faces and bodies and even their hair with ground-up natural ores mixed with plant juices. But of course modern civilized women long since have abandoned such matters, right?
Then there is the GEICO commercial where Neanderthals and Cro-Magnons make complaint about the commercial slogan that, using the Geico website "is so easy, even a caveman could do it." writerfella sees Neanderthal and Cro-Magnon and even Thuringen people every day that he leaves his house or sits back to watch TV. In a country that just now reached 300 millions, there are one hell of a lot of them to see.
All Best
Russ Bates
'writerfella'

Re "a dichotomy between what people believe they are and what they really are": Whether it's an actual Indian or a representation of Steve's id, it's still an Indian acting like a savage. If Anheuser-Busch wanted to portray Steve's real self accurately, it should've used a primitive Caucasian--e.g., a caveman. Choosing an Indian to represent savagery, for whatever reason, is stereotypical.

Writerfella here --
No one said it was not a stereotypical representation. But the origins of human ritualized violence and male-bonding behavior could not be indicated otherwise. When I watch the commercials, all the rest of the people save Zagar DO NOT VANISH FROM THE SCREEN, leaving Zagar alone as the only context. The point of the ad is a humorous comparison and therefore a mirror is being held up, sort of Anthropology Light...
All Best
Russ Bates
'writerfella'

Re "the origins of human ritualized violence and male-bonding behavior could not be indicated otherwise": As I said, a primitive Caucasian caveman could've represented these origins. Or a primitive African "spearchucker." Using a primitive Amazonian Indian was a conscious and arbitrary choice.

The commercials could've represented humanity's dark side in other ways, too. Think of a Viking or a Hun or a Mongol, if you want a well-known historical barbarian. Or a conquistador, a Nazi, or a jihadist, if you want to get into the barbarism of military conquest. Or the Frankenstein monster, the Wolfman, or Dr. Jekyll and Mr. Hyde in the fictional realm. In short, Anheuser-Busch could've made the same point in many ways. Using a primitive Amazonian Indian was absolutely not the only choice.

Moreover, you're stretching to find an anthropological significance that isn't necessarily there. What is there is pretty simple. Ignorant Indian savage knows nothing about Western ways, but a Bud Light is enough to civilize him. Period.

Writerfella here --
Yes, perhaps. But what the ads are expressing is this: modern American men and Amazonian tribal men are contemporaries in this time period. Thus, it could not be any other kind of men, especially if they are not contemporary to one another. There is a rule in SF and fantasy: one element of speculation or fantasy is allowed, or the whole thing falls apart otherwise. I believe they have obeyed this rule and so I not so much approve the presentation as I agree with its choice of contexts.
All Best
Russ Bates
'writerfella'

Okay, the ads express that "modern American men and Amazonian tribal men are contemporaries in this time period." And I'm expressing that that's an arbitrary and unnecessary choice to convey the commercial's message. The beer could've civilized a barbaric ancestor as easily as it civilizes a "savage" contemporary.

Furthermore, even if we accept your premise, the ads are still stereotypical. A lot of Amazonian Indians have become Christians, are wearing Western clothes and living in Western homes, and have gotten jobs on farms or in mines. Choosing one of the few Amazonian Indians who is still in his natural state is a stereotypical choice.