On the indigenous frontline

'Whispering in the Giant's Ear' looks at Native challenge in BoliviaComment:  As usual, Gandhi and ML King knew best. Score another victory for nonviolent action. 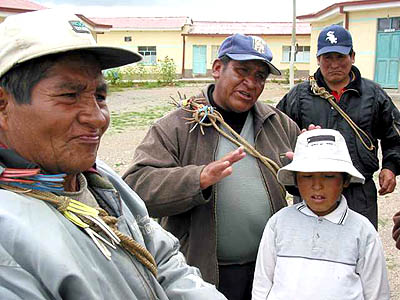 It's a mixed bag with Morales. On the other hand is his admiration of the Venezuelan dictator Chavez (yes, the man who banned radio stations from playing music that he didn't personally like) and plans to follow his lead in assuming significant personal power.

I understand that Morales simply does not have the political base in the government to assume a Chavez-like dictatorship. Hopefully, this will mean that the bad things he wants won't happen, but the good things will.

Morales is just an individual. He won't be around forever. I'm more interested in the grassroots indigenous movement as it confronts the forces of globalization.

Looking at your page, I'm very strongly in favor of globalism that you call "narrowly conceived".

There won't be grasroots anything in Bolivia if Morales follows the model set forth by Castro.

Well, Morales isn't a dictator yet.

I was quoting someone on globalism, but I tend to agree. The narrowly conceived version of globalization is probably better than the expansive version.

Writerfella here --
Hmm, wonder what the chances are for a 'South Africa'-type outcome? But then again US interests would not be served by a Nicaraguan Contra situation either.
All Best
Russ Bates
'writerfella'