An Emmy for Bury My Heart

The winner:The losers:Comment:  Bury My Heart probably won for best television movie because it had good performances and it looked good. It also may have won because it was an HBO prestige project from a known player (Dick Wolf). Awards voters often don't see every nominee; they go with the director, producer, or studio with the proven track record.

They especially like films with serious subjects--e.g., Gandhi, The English Patient, Crash--whether they're truly the best or not. What someone wrote about the Oscars also applies to the Emmys and to Bury My Heart:For that matter, Bury My Heart may have won because it was the best of a mediocre bunch in a weak field. I never even heard of the other nominees.

Bury My Heart didn't win for best writing because it wasn't that well-written. Most critics said it was more of a dutiful lesson than a stirring drama. About the only scene they praised was Sitting Bull's exchange with Colonel Miles--and that was totally bogus.

I haven't seen the seventh Prime Suspect yet, but I have seen the first six. If the last show was anything like the previous ones, it undoubtedly deserved the "best writing" award. As any good critic could tell you, the Prime Suspect series is in a class above Bury My Heart. It isn't even close. 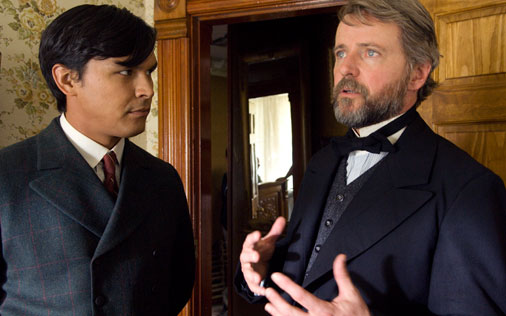 Writerfella here --
Carole must be German and therefore used a German term. Contrapuntally, the critics' favorite for the Emmy for Best Made For TV Movie was LONGFORD, also an HBO film. But BURY MY HEART AT WOUNDED KNEE indeed did win the singularly most important award for which it was nominated.
Thus, writerfella won't tell you that he told you so. He won't. He won't.
-- THE HELL HE WON'T! --
All Best
Russ Bates
'writerfella'

Fortunately, I already explained why Bury My Heart won for best picture but not best screenplay. It was mainly because of the performances and the pageantry, not because of the writing.

In other words, I told you why the critics and I lambasted the movie's storytelling. They and I were right.

Writerfella here --
Perhaps. But the fact that the Emmy was awarded means that someone's judgment was wrong. Whose opinion was wrong, therefore? Just asking, as reality cannot be changed by opinions...
All Best
Russ Bates
'writerfela'

I don't know if the Emmy voters' judgment was wrong, since I didn't see the other four nominees for best picture. I do know that Bury My Heart's screenplay was good but not great. It didn't deserve to win and so it didn't.