Why Bury My Heart won

Hollywood Loves Indians.  They Really, Really, Really Love IndiansComment:  Carole argues that HBO made Bury My Heart so liberals could feel good about seeing the US government as the "pillaging powerful." Maybe, but as a card-carrying liberal, I didn't feel good about the movie's portrayal.

Perhaps the superficial motive was to please liberals--especially those who haven't read Dee Brown's book and don't know their Native history. But I'd say the deeper motive was to please the conservatives who support our government's imperialist policies. Bury My Heart gave these people succor by justifying the US onslaught against Indians.

As I wrote in my review:That's basically the same position we've taken in Iraq. Sure, we've killed tens of thousands of civilians and destroyed the country's infrastructure. But we're fighting "evildoers" who supposedly want to kill tens of thousands of our civilians and destroy our country's infrastructure. In short, their evil justifies our evil--just as in Bury My Heart.

So the movie has something for everyone: a sinful US government for liberals and sinful Indians for conservatives. No wonder it won the Emmy for best picture. 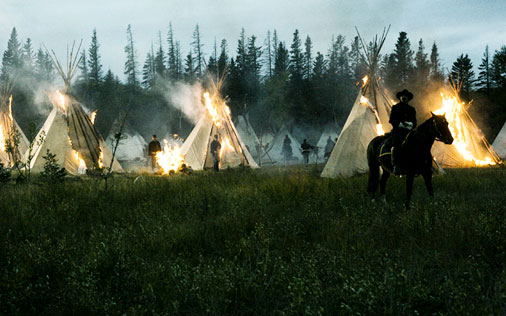 Writerfella here --
As a member of the Academy Of Television Arts And Sciences, writerfella voted for BURY MY HEART AT WOUNDED KNEE in all of the categories for which it was nominated. Tell me, Rob, where did YOUR votes go?
All Best
Russ Bates
'writerfella'

Don't get so caught up in the "liberal" label, my friend. That's the whole point. That some who do wrap themselves in the cloak of progressivism are quite the opposite in real practice.

It's not a case of "liberals" being openminded and "conservatives" hating minorities. That kind of thinking is as hackneyed as this movie was. In truth, closemindedness is the trap of those on both ends of the spectrum who feel the need to create boogie-men to blame for the woes of the world. True progressivism is acknowledging the sins as well as the strengths of those we might not always agree with on other issues. To do otherwise leaves you wide open to becoming an abject hypocrite--like many of our Hollywood friends.

I didn't vote for anyone, Russ, since I'm not a member of the Academy. As you undoubtedly know.

Evidently the other Academy members disagreed with you, which shows they have better taste than you do. Unlike you, they know how to think critically about art--to distinguish between good and bad storytelling.

Did you actually see the other nominees? Or did you just vote for Bury My Heart because you have no ability to assess flawed works? You know, like Apocalypto? Or the stories and scripts you sent me, none of which were perfect?