After reading about White Fawn's Devotion and James Young Deer, the first Native film director, I was intrigued. I don't know much about the silent movie era, so I dug deeper. I found a lot of impressive information about Young Deer and his wife.

This story is definitely a case of "the more things change, the more they remain the same. Almost a century ago, Hollywood was doing about as well as it's doing now: trying to portray Indians positively and hiring Indian actors. Almost a century ago, Natives were protesting negative stereotypes and the "vanishing Indian" trope. So much for the asinine claim that critics like me are Johnny-come-lately "do-gooders" who don't reflect Native concerns.

Almost a century ago, movies addressed serious issues such as racism, assimilation, and interracial marriage. Almost a century ago, they still engaged in serious stereotyping: the stoic warrior, the beautiful princess, the doomed romance. Not to mention the teepees, the big chief, and the lack of authentic culture and history.

After movies like Apocalypto, Comanche Moon, Indiana Jones and the Kingdom of the Crystal Skull, and Twilight, you wonder: Have things gotten any better? Or is Hollywood still giving us the same ol' half-hearted tries filled with mistakes and stereotypes? 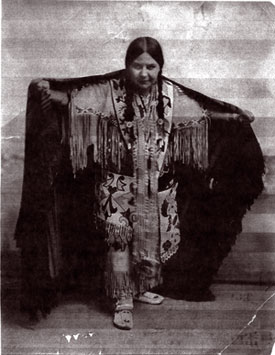 "Almost a century ago, they still engaged in serious stereotyping: the stoic warrior, the beautiful princess, the doomed romance. Not to mention the teepees, the big chief, and the lack of authentic culture and history."

I'd certainly cut them some slack on the "doomed romance" part, a staple of romantic fiction, film, and other art for many centuries, whether or not Natives are involved. The rest, of course, is more like a checklist of stereotypes. I'm surprised at the lack of totem poles, however.

Also, "Red Wing" was the name of a succession of Eastern Dakota chiefs

The city of Red Wing, Minnesota bears his name. In some versions of the Winona "Lover's Leap" legend, "Princess Winona" is the daughter of Chief Red Wing, which makes her "Princess Red Wing" in a way.

It's the interracial aspect of the doomed romances that matters here. These romances were doomed because whites and others weren't supposed to mix. And because Indians were supposed to vanish off the face of the earth.

Proving the point, did early movies show lots of doomed interracial marriages between whites and blacks? No. Why not? Despite rampant prejudice against blacks at the time, no one thought they were going to disappear.

I didn't complain about the name "Red Wing," did I? The names I complain about are the made-up ones like Brave Eagle, Grey Wolf, and Little Fawn. Such names are a cliché among Indian wannabes.

Even if you can find Indians with similar names, they're stereotypical. Why? Because wannabes choose these clichéd names much more often than they occur in reality. And because wannabes never choose non-clichéd names such as Blue Duck, Spotted Beaver, Kills Straight, or One Who Yawns.

When one pursues the existance of J. Younger Johnston / James Young Deer you quickly discover a rather shady character. There is no record of him on"Ho Chunk" rolls and I found no record of him or his family in either Dakota/Thurston county, Nebraska and/or Oklahoma records. Another point often written about is his return from Europe in 1919 - no record. He had legal problems in California, skipped the country before the case was settled and re-entered the U.S. in 1914 aboard the S.S. Cedric (he listed his race as "White" on the ship's passenger list and his birthplace as Dakota city, NE, on 1 Apr 1893.

He would have been 9 years younger than his wife. She also became an actress after her marriage, not before.

I believe that James Young Deer would have to be identified an another Indian "Wannabe."

Thanks for the info, Anonymous. For more on the subject, see Young Deer a Fake Indian?