Curiously, Larry McMurtry's short biography of Crazy Horse has an average rating of only three stars on Amazon.com. That's not very good for a major author like him.

I haven't read the book, but I wonder if it reinforces my claim that McMurtry was biased against Indians in Lonesome Dove and Comanche Moon. There are hints that it does.

"Crazy Horse"Comment:  The quotes in the second article are what inspired me to post this. The Lakota were a "broken people"?! Would they agree with that characterization? Somehow I doubt it.

These quotes suggest McMurtry's Eurocentric bias. Indians used to be brave, noble savages in some distant, romantic past. But by the time the Americans confronted them, they were broken, pitiful remnants of their former glorious selves. They were on their way to dying out despite the efforts of a few valiant exceptions such as Crazy Horse.

This is exactly the attitude Europeans take about their beloved Winnetou in Karl May's Old Shatterhand books. Namely, that Winnetou was a brave, noble savage among the corrupt and degraded bands of skulking Indians. One European has even argued that these portraits of a noble savage means the books were pro-Indian.

Wrong, I told him. Look at the corrupt and degraded bands of skulking Indians, not at the single noble savage. These "broken" Indians are the norm in May's (and McMurtry's) books. They determine whether the author was pro- or anti-Indian. 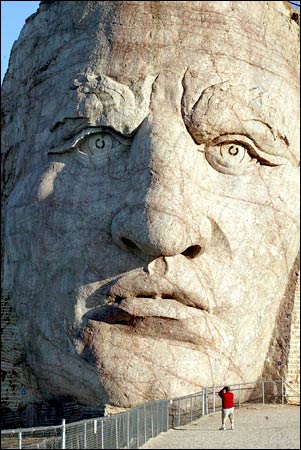