Thanks for reading my blog, Charlie. You're welcome to read Pond's blog too. I read it myself every day or two.

But I think you have a key point backward. There are many more publications and websites promoting Native accomplishments than there are analyzing Native stereotypes. Although Pond is doing a good job gathering the news, his blog isn't much different from a list of press releases and MySpace and Facebook bulletins.

In contrast, the information my site provides is almost unique. If anyone is doing something similar for the universe of Native stereotypes, I'm not aware of it.

We could look at almost any Native-themed production to prove the point. Take Bury My Heart at Wounded Knee, for instance. There must've been dozens of puff pieces that touted this movie as a bold, honest look at Native history. And dozens of reviews that touted the Native performances while ignoring the mistakes and stereotypes.

In contrast, there were about three essays (including mine) that noted some serious problems with it. So the positive-to-negative ratio was something like 100-3. Isn't that positive enough for you? What would you like the ratio to be: 1,000 to 3? 10,000 to 3?

Education is the solution

As for the "solution" you want, I think it's inherent in my analyses. Criticize Native stereotypes until non-Natives understand why they're wrong and stop producing them. Because learning to think critically is the essence of education. Since high-school and college students and teachers are citing my work, I think it's having an effect.

Not that focusing on "problems" is all I do, natch. About half of my postings are purely positive--e.g., announcements of Native "firsts" and other achievements. Given how frequently I post, I'd say I have more positive news and more negative reviews than most sites.

I agree that Natives should create their own movies, TV shows, books, and comic books. And I help publicize their efforts when they do. All this comes under the heading of educating the public. Whether I point to something that's right or wrong, it's an opportunity for people to learn about Natives.

And while I criticize stereotypes, I'm also spreading the (positive) Native news at PECHANGA.net...writing my own Native-themed articles...and trying to publish Native-themed comic books. I'm not sure why I have to keep reminding people of these things, but I consider myself "part of the solution." I examine people's work and show them how to do it better. 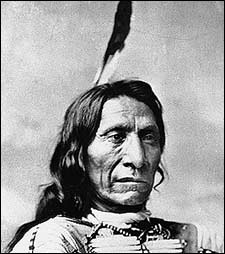 ...and a stereotypical chief.

Your tone is starting to grate on me. This posting comes across as so defensive. I think there is a way you could say all of this while still being respectful. I hope you don't mean these things the way they come across. I've been reading your blog for a while now and does seem like every now and then you go off the deep end and come across like you think you know better than Natives do what's best for Natives. I'm sure you've criticized paternalism often, so I know you can't possibly really think that, but posts like this really do make it seem that way. I would like to continue reading this blog, but not if you continue to come across like this. Please accept my constructive criticism and try to change the tone of your writing, or I am afraid you will lose the Native portion of your audience.

The occasional criticisms and attacks I receive are starting to grate on me. When they stop, so will responses such as this one.

My writing style is what makes me an effective advocate for the things I believe in. The choice is whether you accept it or not, not whether I change it or not.

Sorry, but nothing in this posting is paternalistic. I implied that I'm good at what I do, but not that I'm better than Native people.

I constantly quote passages from Native writers because they're the people we should be listening to. I chime in only when no one else is making a point I consider important.

In this case, the point was the dearth of critical analyses. We need more of these analyses, in my opinion, not fewer.

Incidentally, saying my tone is grating isn't what I'd call "constructive criticism." If you want to criticize me constructively, 1) quote the lines you find grating, and 2) rephrase them to convey the same message in a less grating tone. Then we can discuss how your version is different from mine.