Ad offering 'Native Extraction Service' condemnedAnd:And:Comment:  At first I thought this was a dentistry service for Natives. I guess not.

No word on whether the "extraction service" is limited to Native youths. If David Yeagley, Ward Churchill, or various fakes and wannabes get ornery, can we have them removed?

Ahem. Nice to see racism that's so plain even the deniers can't deny it. This is a "nice" northern counterpart to the reports of nooses and KKK hoods at UC San Diego.

It also seems like a textbook example of a hate crime. It exists for no other reason than to incite hatred. And it incites people to act on their hate: to call someone and have Natives "extracted."

And the ad used three real Native kids without their face blurred. Classy. I'd say these kids and their parents have a good chance of winning a libel suit against whoever placed the ad.

Why the ad is stereotypical

If it isn't obvious, this ad is promoting the idea that Native youths are criminals, thugs, and lowlifes. In other words, modern-day savages. In that regard, it's kind of like SCALPED.

It's reminiscent of other anti-Indian ads such as the infamous "hunting season" one from a decade ago. The message of them all is that Indians are lazy, good-for-nothing wretches. In other words, scum, parasites, or vermin. That the only good Indian is a dead or "extracted" one.

For more on the subject, see Savage Indians.

Below:  "This online classified ad offered the free removal and relocation of aboriginal youth from parts of Winnipeg. CBC News has blurred the faces in the picture. The ad has since been pulled down." (UsedWinnipeg.com/CBC) 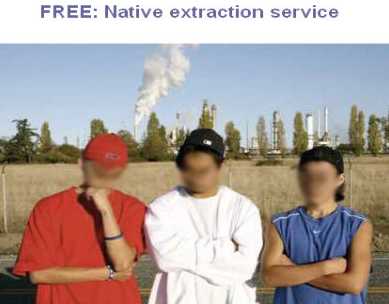 What is truly disturbing aside from the obvious is that they used an image of our boys, from our program Native Lens, who co-created our film March Point, a story about these three trying to do something to not only better themselves but to positively effect their community at Swinomish. This add, has negatively impacted them, their families, and Native people as a whole. This is a HATE CRIME and we are calling for the police to treat this as such!

"We are saddened by the fact that some people still harbor the extreme hatred toward native people that this Ad demonstrates. However, we are also encouraged that many more people recognize this as a racist attack on a generation of Native American Youth who for the most part are law abiding citizens striving to overcome generations of poverty and oppression and live productive lives. We hope that calmer heads prevail and that the individuals responsible for posting this Ad are prosecuted to the full extent of the law."

Thanks for the update. What a slap in the face for these young Native filmmakers!

For more on March Point, see:

Longhouse Media is appalled by the use of our image for such hateful and demeaning purposes. The photo of the three adolescent boys in the "Native Extraction Service" advertisement placed in the UsedWinnipeg.com website, was taken from promotional material for our film MARCH POINT, an award-winning documentary. This film was made with these three young filmmakers and tells the story of their coming of age struggles in a Native community in the United States. That this image would be used for such deviant ends is deeply hurtful to these young men and their families, and to the Native community as a whole.

We hope this advertisement was taken down before any violent crimes occurred; in any case damage was inflicted on indigenous youth in the form of threat and intimidation. The Criminal Code of Canada says, "a hate crime is committed to intimidate, harm or terrify not only a person, but an entire group of people to which the victim belongs. The victims are targeted for who they are, not because of anything they have done. Hate crimes involve intimidation, harassment, physical force or threat of physical force against a person, a family or a property." -- Section 319(1): Public Incitement of Hatred, Criminal Code of Canada

We condemn this as a hate crime, and will join with others to see the perpetrators are brought to justice.