Last Saturday (6/12/10), Dateline aired an episode on the James Ray sweat lodge deaths. Here's a transcript of the show:

Could a well-known self-help guru have prevented the tragic deaths of three spiritual seekers at his retreat in an Arizona sweat lodge?

And some thoughts from Roscoe Pond on it:

Dateline NBC 2010 Episode Called Deadly RetreatComment:  I'm not sure Dateline offered any new information on the subject. I didn't watch the episode or read the entire transcript.

I just liked the way Pond put it. People have a stereotypical notion of noble savages and Native spirituality. It's based on the modern-day stereotype of the spiritual warrior: a wise shaman playing a flute beneath a soaring hawk on a mesa.

This is a benign version of the old savage stereotype. It comes from a huge number of movies and other media sources in the last few decades.

James Ray repackaged and sold the stereotypes. "You can be as strong and serene as a Native if you undergo a series of Native rituals. Just $9,000 for a Native-style weekend."

Because of Ray's inexperience, his sweat lodge killed three people. The stereotypes played a critical role in the deaths.

Here, let me spell it out:

Summing it up: The stereotypical beliefs are what have created the New Age industry. Without them, few people would be seeking or paying for Native spirituality. Millions have lost their money and three have lost their lives because they believed what they saw in the media.

For more on the subject, see Ray Charged with Manslaughter and Courting Death in Ray's Sweat Lodges. 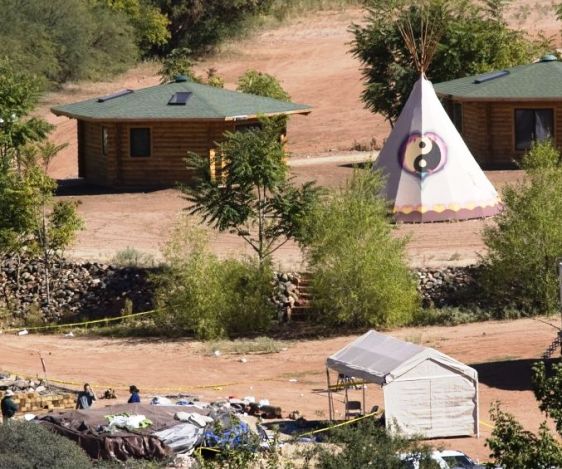 Amazing how DATELINE would air something like this without emphasis or having an episode on the hundreds of sweats done legitimately by experienced actual natives.

I have gone into the sweat lodge a few times in my life and was always told to leave if I did not feel well during the sweat.
I did not see this episode but I have been inside a sweat.

I have seen sweats that were co-ed with males and females, something I do not consider traditional but a new-age thing.

The irony in this is that the man will probably use the dead peoples money for his defense lawyers. Another shameful chapter from the greatest nation on earth and its ability to equate money to the human soul.