Combat Hospital is a summer-replacement TV series about a military hospital in Afghanistan. Adam Beach guest-starred in the second episode, Enemy Within (airdate: 6/28/11).

Here's a mini-review that applies to the second episode also:Beach plays a Special Ops officer called "Joe" who is embedded with Afghan troops. He brings in a wounded soldier and flirts with Dr. Rebecca Kincaid while he waits.

A review of the second episode:

Combat Hospital Review:  "Enemy Within"Comment:  Beach's character "Joe" doesn't say or do anything to indicate he's Native. The only curious note is how the doctors think he's Afghan until he speaks perfect English.

I guess you might mistake a brown-skinned Native American for a brown-skinned native Afghan. Especially in a harried hospital where you don't have time to think. I believe Afghanistan as a crossroads of Asia, has many different ethnic types from Iran, Russia, Pakistan, India, and China. Beach's vaguely Asiatic look might pass muster.

Anyway, it's nice to see a TV show set in Afghanistan. But don't the producers understand that TV has done generic hospital shows to death? Combat Hospital is forgettable for the same reasons Off the Map was forgettable. Without such characters as Hawkeye Pierce, Hot Lips Houlihan, and Radar O'Reilly, it has little or nothing to offer. 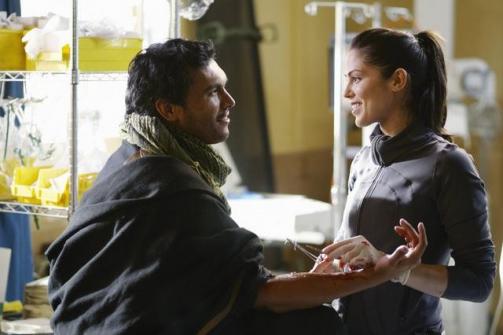 When I first saw the previews, I immediately thought of China Beach. Surely I can't be the only person who watched and loved that show?

And Indians are always mistaken for the enemy. Goes back to the rebellion in the Philippines.