Which massacre was worst?

A reader claimed the Minnesota Massacre of whites was worse than the Bear River Massacre of Indians. Here's how I responded:

A few problems with designating the Minnesota Massacre--aka the Sioux Uprising of 1862--as the worst, Anonymous:

In short, the numbers are in the same ballpark. We can't say definitively that one massacre was worse.

2) The Sioux under Little Crow held a war council and officially declared war on Minnesota. Their first attack was on a government agency, which arguably was a legitimate target. In other words, the civilians were killed during a military attack; they weren't massacred in their sleep or after they'd offered to surrender.

For a comparable situation, consider the Japanese attack on Pearl Harbor. We don't call that a massacre because a) Japan was at war with US allies and b) Pearl Harbor was a legitimate military target (to the Japanese). If Japan had attacked a civilian population with no military resources, as we did at Hiroshima, then we might call it a massacre.

3) The main Indian attacks occurred over a week--from Aug. 18 to Aug. 25, 1862. A massacre arguably has to occur in one fell swoop--in a single day or so. If the defenders know someone is after them and they have time to prepare, they're arguably participants (even if unwilling) in a war. In that case, they can't be "massacred"--unless, again, the attackers kill them when they're not fighting.

So the first Sioux attack on the Lower Agency August 18, and the civilians killed that day, may qualify as a massacre. But any attacks after that arguably were battles, not massacres. 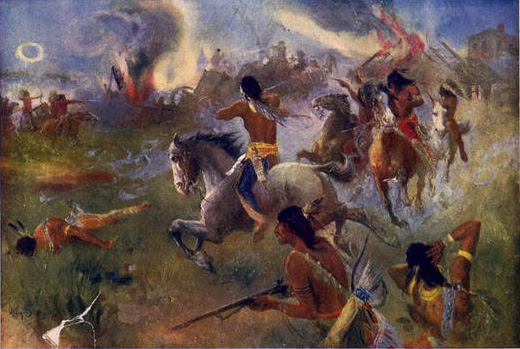 Writerfella here --
There was "a civilian population with no military resources" among their thousands at all "at Hiroshima," and so it was not a massacre? Who fired the cannons at the Little Washita? Who fired the rifles at Bear River? Who fired on unarmed Lakotas at Wounded Knee? And then, who was it who dropped the atomic bombs at Hiroshima AND Nagasaki? Geez, it must have been unnamed militants from the South Orkney Islands. Wow, they still could be around right now and maybe are being held at Guantanamo Bay...
All Best
Russ Bates
'writerfella'

I've been looking for a while for something that shows Chief Wapasha III riding a white horse in battle. I've read of such a depiction, and now I finally find it in your blog. I started researching this before the Wikipedia entry existed.

I said "we," meaning Americans in general, don't call Hiroshima a massacre. If you asked me, I'd say it was a crime against humanity and the worst case of mass murder in history.

That's because all lives are equally valuable to me. Logically, I don't distinguish between American lives and others.

Writerfella here --
And what would you say, Rob, to the loss of life in Cambodia when an American F-111 fired TWO Aim-56 nuclear air-to-air missiles at a flight of MIGs in 1969? writerfella worked on those missiles and thus knew the inventories. And two from that time period supposedly are 'unaccounted for.' Massacre by Americans is not a concept somehow lost in the 19th Century...
All Best
Russ Bates
'writerfella'

Who died in the alleged incident? Cambodians? Russians? Americans?

In any case, most deaths during wartime are tragic and unnecessary. These deaths probably were no different. So what's your point?

I already referred to Hiroshima. If that isn't enough, I could list the innocent people Americans have killed in Vietnam, Korea, Libya, Somalia, and the Balkans. Or in the Persian Gulf, Afghanistan, and Iraq.

I guess you think you're telling us something new about "EuroMan," but you're not. Westerners have denounced the killing of indigenous people ever since Bartolomé de las Casas condemned Columbus. Some of us can tell right from wrong, believe it or not.