Whalers slapped on the wrist

Makah judge fails to empanel jury to prosecute whalersComment:  For more on the subject, see The Makah Whale-Hunt Controversy. 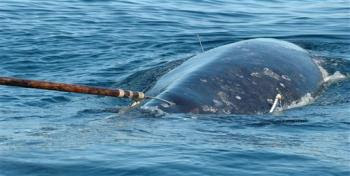 Writerfella here --
Being "slapped on the wrist" far is worse than anything world authorities have inflicted on, say, the Japanese for their ongoing assault and savagery against whale species. Maybe having atomic bombs dropped on them in wartime earned the Japanese some 'get out of whale jail free' cards...
All Best
Russ Bates
'writerfella'