In the comments on Indian Casino in Family Guy, a reader compared the Foxwoods Resort Casino to the fictitious "Geronimo's Palace." As he put it:My response:

It's true I've never been to Foxwoods, Anonymous. But I've been to a couple dozen Indian casinos and seen pictures of many more. I know the field.

In all the pictures I've seen of Foxwoods, there were never any totem poles, teepees, half-naked Indians, animatronic chiefs or braves, etc. Compared to that, your belief that I don't know Foxwoods isn't worth much. Show us the evidence, either in text or imagery, that the casino is full of such over-the-top stereotypes.

Really, it shouldn't be hard. I listed most of the stereotypes in the Family Guy episode. Just fill in the blanks. The casino shaped like giant teepees is a parody of _______. The employees wearing vests over their naked chests are parodies of _______. Etc.

In case you're like writer Russell Bates--incapable of doing your own research--I'll help you out. Here's a Google search on Foxwoods casino that shows shots of the exterior and interior. Which of these is remotely comparable to the excesses displayed in "The Son Also Draws"?

In fact, show me any Indian casino in the country that's decked out with such stereotypical images. Go ahead...we'll wait. Prove that there's some justification somewhere for this racist mocking of Indians.

As for meeting Pequots, I interviewed Pequot chairman Michael J. Thomas for a Casino Journal article once. Thomas didn't speak like Tonto or a New Age wannabe. The magazine's photos of him didn't show him wearing a headband, moccasins, or Pendleton bag.

Again, you've made a charge with zero evidence. You'll have to do better than that to repudiate one of my postings. Good luck proving you know more about Indian gaming than I do...you'll need it.

To read about other people who don't understand the concept of racist stereotyping, see South Park:  "Red Man's Greed." 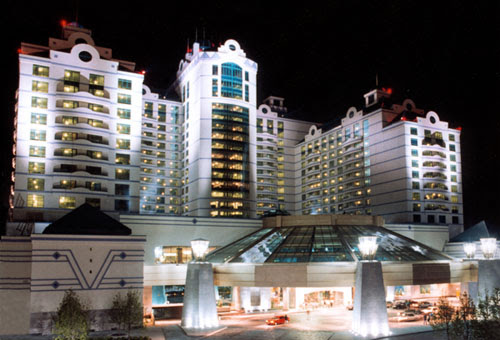 Their Museum has several models of half-naked Pequots but no totem poles, featherheads, or teepees.
God is good
jpu

Writerfella here --
writerfella for 40 years strenuously and assiduously has researched each and every story, script, screenplay, and article that he has written. However, Rob Schmidt's 'research' for any number of his 'reviews' is to read the reviews of other 'critics.' Rob Schmidt by his own admission on this blog refused actually and physically to go and see both 300 and APOCALYPTO, but that did not prevent Rob Schmidt from writing his own 'reviews' of same. Ahem...
All Best
Russ Bates
'writerfella'

Needless to say, the museum isn't the casino. I'm still waiting for someone to answer my fill-in-the-blank questions.

Give me air and hotel fare, Russ, and I'll give you a firsthand report on Foxwoods. Until then, no.

When you cover as many things as I do, you can't see everything yourself. If you wrote more reviews and fewer paeans to yourself and your accomplishments, you might understand that.

Reading what others have written on a subject is research, genius. Scientists, lawyers, and other investigators do it all the time. That's what you've allegedly done by reading books and articles on the "Anasazi." Unless you've dug up their sites yourself, spare us the double standard.

Unlike you, I don't just "research" something in my own mind. Not only do I do the work, I cite and quote it so people can verify it. I present the facts and evidence so others can learn from my efforts.

It's called "educating," friend. You know, writing for someone else's benefit rather than your own? You might want to try it sometime.

P.S. The phrase "actually and physically to go and see" in your comment is redundant. You could write "to see" instead and it would say the same thing.

Rob, maybe you should actually physically go and see the casino. Not only that, really go there and be there and personally enter the place. You can quite possibly consider making a visit also.