Movies give us fictional stories in the context of historical facts. They purport to tell us tales that are figuratively if not literally true. To do this they use verisimilitude. They recreate history with sets, costumes, makeup--with as much attention to detail as possible.

Movies show Americans declaring their independence from Britain, taming and settling the Wild West, and winning two world wars. Why? Because these things are (more or less) true and moviegoers know it.

No movie has ever portrayed George Washington, Thomas Jefferson, Abraham Lincoln, or Teddy Roosevelt as a savage spearchucker. Americans would be outraged if a movie made such a claim. But hundreds if not thousands of movies have shown Natives as savage spearchuckers and no one blinks an eye.

Given all this, why would Americans think movies are falsifying Native cultures and religions? There's no good reason to think movies are telling the truth about Americans but lies about Native Americans. Every history-based movie purports to tell a version of the "truth." So moviegoers respond rationally and believe what they see.

They do this for several reasons: Because they have no other sources of unbiased information. Because everything they see in the media reinforces their beliefs. Because movies are based on historical research, books, and expertise. And because respected filmmakers (Gibson, Spielberg, McMurtry and Ossana) vouch for their work's accuracy.

Below is a plausible but phony mural from Apocalypto. What percent of people would believe Mel Gibson filmed an actual mural and what percent would guess he fabricated this mural for his movie? I'm guessing the ratio would be 80%-20%.

Now let's add a note from a published article, which I reported in Gibson Sacrificed the Maya:I'm guessing the percent who think this mural is real just went up to 90-95%. Because Mel Gibson made a point of trotting out a respected professor who vouched for his work. Because Gibson wants people to believe his movie. 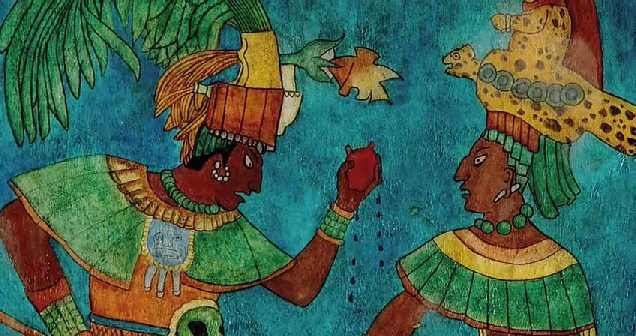 Writerfella here --
The main focus here was movies, but this post would apply as much to short stories, novelettes, novellas, novels, television, and the internet. If the role of movies ONLY was to portray razor-thin factual history and not fictionalized representations thereof, such a medium would have perished from lack of material and lack of theatre attendance before the mid-point of the Twentieth Century. There would have been no JAWS, no STAR WARS, no CLOSE ENCOUNTERS, no TITANIC, no FORBIDDEN PLANET, no CITIZEN KANE, no GONE WITH THE WIND, not even SEE YOU NEXT WEDNESDAY, ad infinitum. If only because certain individuals seemingly demand reality rather than fiction in their entertainment. One only has to see the films produced during the Nazi regime in Germany to know what that kind of demand and control would do to creativity, suspension of disbelief, and even verisimilitude. writerfella was trained at the University of Oklahoma and the University of Washington and the University of Iowa and the University of Miami (FL) in screenwriting and thus he knows that film stories will support at the most three creative and three fictional licenses before the audience will refuse to accept any more. 'Critics' such as Rob Schmidt want NONE of each or either and that is their sum of it all. There is an old saying: before you can write a book, you at least should have read one. The logical extension of that would be: before you criticize a movie, you at least should have written one. Roger Ebert did, and Gene Siskel did not, and their critical exchanges were all the richer therefore...
All Best
Russ Bates
'writerfella'

This post is right on target - because unlike Star Wars, Close Encounters, et al., movies about Indians often present their version of history as the truthful account of a real people. It's that attention to detail and verisimilitude that Rob notes that really underscores “reality” for the viewers. If I had a nickel for every time I've heard someone say "Oh - I know about Indians. I've seen Dances With Wolves...," because it’s so detailed and they had someone research the color of the leaves and omg they speak Lakota! (Except it’s too bad the production company was too cheap to spring for a male Lakota coach for the male actors, but that’s a whole other story.) And the way that DWW, at least, was marketed pretty much asked viewers to see it as an exercise in anthropology as much as an exercise in fictive filmmaking. Apocalypto was pretty similar. And sure, audiences might have such expectations of historical films generally - probably any number of people do think Titanic was downright accurate - but the additional issue is what damage this does not just to our idea of history, but our idea of the now. When historical movies reinforce stereotypes (Indians are savages! And bloodthirsty! Or maybe noble! And they all vanish!), you're not only doing damage to the past, but to the present.

And critiquing a film (or book, or story) on the basis of the effect it has on its audience is, all spurious protestations to the contrary, a legitimate and necessary act. Critique is NOT the same as censorship - pretending they're equivalent is just sloppy reasoning. After all, for all that they are imbued with Nazi ideology, Leni Riefenstahl's films are still widely available, but the extensive and widely available critique of the films has turned them into cultural artifacts that function very differently than when they were presented as unquestioned truth in Nazi Germany. This is why I sometimes have my students watch Dances With Wolves in order to discuss it, break it down, and go over how it's reinforcing certain familiar stereotypes. (And before you ask: they know they can disagree with me, and they do; it's not about feeding them my opinion, but about modeling critical approaches and giving them tools to use themselves.)

Finally I just have to say that saying that only those who’ve written a film are allowed to critique a film is one of the most ridiculous and defensive things I’ve ever heard.

Writerfellahere --
Bravo! You got the idea that writerfella was expressing! SARCASM is writerfella's best weapon! This blogsite is based upon a 'critic's' position. EVEN if the webmaster has NEVER seen a particular film, he STILL reviews said film! Sort of like being absent from a college history class the day that they taught history. Yes, it was ridiculous and defensive, but that is how writerfella operates, as he has been active in the TV and film industry as a writer and Rob Schmidt only has been a consumer. You can eat but you can't hide your fat...
All Best
Russ Bates
'writerfella'

Writerfella here --
POSTSCRIPTUM: The other post was EXTREMELY accurate in that the Lakota teacher for DANCES WITH WOLVES was female! Thus it was that the male actors spoke Lakota with a female point of view and accent. EuroMen do not understand that Native languages had a gender-specific aspect. But then, that is because THEY mostly ignore THEIR own females...
All Best
Russ Bates
'writerfella'

Actually, many, if not most, "EuroMan" languages have a gender division in them, even if English does not.

Ebert wrote a screenplay and Siskel didn't, but Siskel was an equal partner in their televised bouts. Nobody thought Siskel's reviews were inferior because he hadn't written a screenplay.

So your argument supports my position, Russ, not yours. A major critic like Siskel didn't have to write a movie to criticize one.

Re "saying that only those who've written a film are allowed to critique a film is one of the most ridiculous and defensive things I've ever heard": Exactly, Zora. You nailed it.

For more responses to Russ, see Only Filmmakers Can Judge Films? and Only Three "Licenses" Allowed?

Re "EVEN if the webmaster has NEVER seen a particular film, he STILL reviews said film!" No, dumbass. If I haven't seen a movie, I post other people's reviews of it. How stupid are you that you can't understand this even when I explain it in plain English?