In The Rest of Kingdom of the Crystal Skull, Russell Bates justifies the movie's stereotyping as follows:Here's my response to Russ:

So the old movie serials were stereotypical and the new Indiana Jones serials are stereotypical. Nice. You still haven't learned that two wrongs don't make a right.

Old Westerns were based on a formula also: whooping warriors attack peaceful pioneers. Should new Westerns be based on the same formula? Most filmmakers would say no, but if you were consistent, you'd say yes.

Spielberg and Lucas changed the formula enough to avoid showing hordes of black savages in deepest, darkest Africa. And to avoid showing black Uncle Toms and Aunt Jemimas in subservient roles. Only Indians remain as a substandard species.

I don't recall if Indiana destroyed any other artifacts in the series, but he helped destroy the crystal skull. He also helped destroy Indian ruins in two movies. He could've left these ruins alone, but his covetousness outweighed his caution. Apparently he never met an Indian site he liked--i.e., one worth preserving.

More important, what you call "recovering" is what most people call "stealing." Indy stole artifacts from the people who owned them without permission from the host countries. Like a typical Westerner, he considered his wants and needs paramount. The term for him is "tomb raider" or "grave robber," not archaeologist.

I'm not sure we ever saw Indy conducting a proper archaeological excavation. In fact, while robbing Indians of their heritage, he caused the destruction of countless Indian artifacts. This man didn't care one whit about the laborious work of studying indigenous cultures. He was an armchair theorist who supported himself as a procurer of stolen goods.

Critics have made much of the fact that Indiana returned the crystal skull to its source. Supposedly this showed a more enlightened attitude. But Indy still stole something that didn't belong to him.

Recall how he got the skull in the first place. Like a common criminal, he raided some tombs outside Nazca, Peru. He sliced open a mummy and took the skull, a gross violation of scientific ethics.

You mentioned Kennewick Man. If Indy were on that case, he'd stand with the scientists against the Indians. If the Indians reburied the skeleton, he might exhume it again. Whether literally or figuratively, he'd thumb his nose at their "superstitious" beliefs.

Finally, we know that box-office receipts are your sole measure of a movie's quality. No big surprise there. If a film does well, you shill for the people who produced it. Success justifies stereotyping in your white-oriented world.

Below:  Indy plies his trade as a trafficker in stolen artifacts. 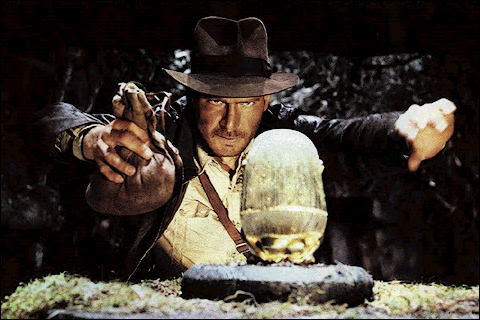 Writerfella here --
writerfella merely indicated that what archaeologists do is what archaeologists do, period. That you agree with him is all that needs to be said.
The old movie serials were the early equivalent of modern television series (same etiological word basis!) and, if done in a time of rampant stereotypes, they were stereotypical. But they never were intended to portray reality or even anything other than the simplest of moralities - good is good, bad is bad. Period.
Modern westerns still will portray whooping warriors attack(ing) peaceful settlers and there is nothing you can do to change it because those have become movie icons. You can complain, but alas...
Interesting that movie serials never showed hordes of black savages in deepest, darkest Africa, not in NYOKA AND THE TIGERMEN, or THE PERILS OF NYOKA, or SECRET SERVICE IN DARKEST AFRICA or THE ADVENTURES OF SMILING JACK or BOY SCOUTS TO THE RESCUE or THE PHANTOM or JUNGLE JIM AND THE DIAMONDS OF JAHAR or HELIUM RAIDERS OF THE CONGO. The enemies or villains always were Arabs or Nazis who were after technological or monetary gain. In fact, most movie serials were westerns because they were the cheapest to film. Hordes of black savages simply were outside the budgets of the average movie serial. Serials such as FLASH GORDON or BUCK ROGERS or even DON WINSLOW OF THE COAST GUARD in fact were major studio projects with budgets that outstripped those of films contemporary to their production.
And by the time of 'Kennewick Man,' Indiana Jones would be dead, IF HE EVER EXISTED AT ALL, WHICH HE DID NOT. Once again, you are railing at fiction and illusion which you have mistaken for reality.
But that is what you do, lacking awareness that tilting at windmills only means you get your hair mussed as you ride by on your donkey...
All Best
Russ Bates
'writerfella'

Re "Modern westerns still will portray whooping warriors attack(ing) peaceful settlers and there is nothing you can do to change it because those have become movie icons": I guess you don't understand that movie portrayals of Indians are changing, albeit slowly. Duh.

Since you don't understand that the change is happening, you obviously don't understand why it's happening. I won't bother to explain the obvious to you again. Besides, I've already tried to educate you about historical accuracy regarding Indians. Apparently your ignorance on the subject is too deep-seated to overcome.

If Indiana Jones were 60 in 1957, he would've been 99 when Kennewick Man was discovered in 1996. But I realize this is strictly a hypothetical case. That's why I wrote "If Indy were on that case...." Are you so obtuse that I have to explain what "if" means?

P.S. If I ride a donkey, you sit on an ass. Your own ass, that is, when I ask you to document your wild claims and you refuse.

The 'homage' argument comes up a lot, and it never gets any less ludicrous. Spielberg himself said he wasn't comfortable having Nazis as cartoon bad guys in the Indy movies after the documentary work he did on the Shoah-- why can't indigenous cultures be treated with a level of respect, too?

And it's also ridiculous to say you can't have echoes or adaptations of a beloved trope-- such as Westerns or serials-- without passing on all the negative baggage of the same. Venture Brothers, for example, affectionately parodies the racist/sexist adventure shows such as Jonny Quest, while still tapping into its 'exotic adventure' vein and not being particularly racist or sexist.