No Indians in Off the Map

I watched Saved by the Great White Hope, the pilot episode of Off the Map (airdate: 1/12/10). It was about as bad as I thought it would be. Here's what the LA Times had to say about it:

Young doctors try to heal patients, themselves in 'Off the Map'

Sappy situations abound in the South American jungle where the expatriate doctors ply their trade in the message-laden ABC series.

By Mary McNamaraComment:  Off the Map is the opposite of shows set in New York City, Chicago, or Los Angeles, where the settings give the shows context and color. It apparently has nothing to say about race, religion, culture, or politics. It's a modern medical ensemble show crossed with a Tarzan movie or Gilligan's Island, and it's about as realistic.

Off the Map is intentionally vague about where it takes place: "somewhere in South America." It's about like having white settlers meet anonymous Indians somewhere in the Wild West. It's an excellent example of how the lack of details makes a show bland and generic.

Let's look at where the show should be situated, but isn't:

The setting's culture is about as vague as its location:

It's ridiculous for a show set in a South American jungle, the home of many Indian tribes, not to mention Indians. It's also ridiculous not to mention any of the possible political or cultural conflicts. Are ranching, mining, or oil-drilling operations intruding on the local residents? How do the residents even earn a living: by subsistence farming or working for a mega-corporation? Are any drug lords or anti-government militias operating nearby? What's the unnamed government's position on economic development, environmental protection, and indigenous rights? Does the government lean to the left or right? Is it pro- or anti-American? Etc.

Off the Map doesn't answer or even ask these questions because they'd intrude on the show's theme. Which is that Keeton the great white "humanitarian" is going to save the primitive brown-skinned people from their own folly. The locals have no healers, no leaders, no authority in their own homeland. They're merely suffering subjects for the white doctors to cure.

Alvarez the lone Latina seems to be more of an administrator and a scold than a doctor. She disappears for long stretches while the white doctors handle the most pressing cases. Her big moment comes when the black doctor Cole tells her to chill out because the Americans know best everything will work itself out.

Cole doesn't have much more to do than provide bits of POC wisdom. When Fuller reports that his patients are dying, Cole's big moment is telling Fuller to go back and cure them. In other words, giving the white doctor his big chance is more important than saving lives at risk. If the brown-skins died, Cole presumably would tell Fuller: "Try harder next time, white boy."

The whole setup is incredibly paternalistic. Even though Off the Map is about "ugly Americans" learning to be better human beings, it handles the subject in an ugly fashion. The great white doctor has all the answers; the people of color serve him as flunkies or patients.

The show's worldview is rooted in the early 20th century, when white missionaries and doctors were the only ones who could save the "dark" regions of the world. It's an insult to all the Latino and Indian people in South America who are taking charge of their lives. Who don't need Americans to help them.

Forty-five years ago, the TV series Daktari had a similar premise. But the black characters in Daktari were more fleshed out than the nameless South Americans who serve as patients in Off the Map. Off the Map is a big step backward in the portrayal of indigenous peoples and cultures.

For more on what Off the Map missed, see Amazon Indians Weren't Savages, Cameron's and Weaver's Anti-Dam Films, and Amazon Indian Students on the Net. 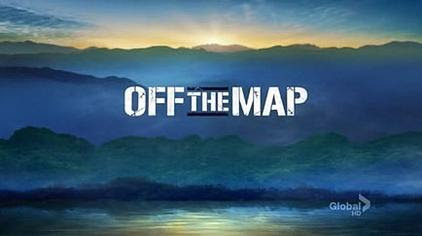 Luckily the show is so bland it won't last. It's all the things you say, AND I could care less about the characters. Ugh.

The creators of Northern Exposure tried a show like this called Going to Extremes (only it was a medical college in the Caribbean.) I was quite young at the time, I can't claim it was racially well done, but at least it was charming and had fun characters.