The story that dominated the news Saturday was the murderous attack by suspect Jared Lee Loughner on Rep. Gabrielle Giffords (D-Tucson). Not coincidentally, he targeted one of the liberal politicians on Sarah Palin's hit list: 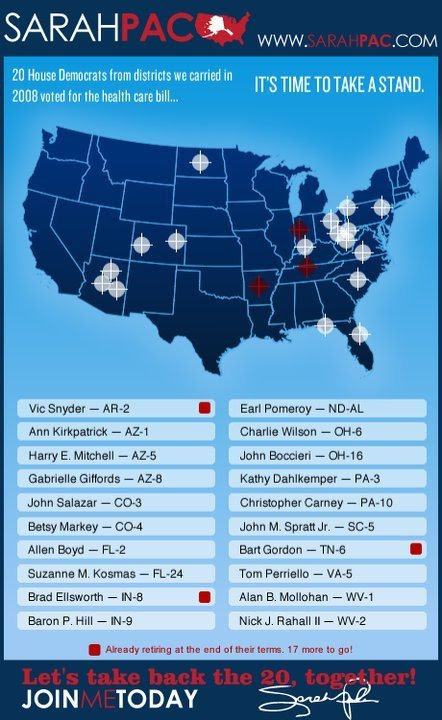 Comment:  There's no truth to the rumor that Sarah Palin updated her website to say: "One down, 16 more to go."

Palin to Giffords: "We meant to target and shoot you only with rhetorical bullets. We want you to die and rot in hell only rhetorically."

No, what Palin actually said was this:

What she probably meant to say was this:Hilarious that Palin took the offending graphic down immediately but there's supposedly nothing wrong with it. The hypocritical party of "taking personal responsibility" strikes again.

For more on Palin's hatemongering, see Racist Rhetoric Fuels Hate Crimes and Palin:  Racism Is a Ploy.
Posted by Rob at 2:01 PM