Political vitriol in the Giffords shooting

By Calvin Woodward and Charles BabingtonA Turning Point in the Discourse, but in Which Direction?

By Matt BaiPointing fingers at the right

A columnist puts the blame where it belongs:

The Wrath of Fools:  An Open Letter to the Far Right

Here's a good critique of the false equivalence conservatives are drawing between the right and the left:

When It Comes to the Rhetoric of Rage, the Right Has the Edge

While we're at it, spare me talk about Loughner's "personal responsibility" for his actions. These pundits have taken that into consideration. They didn't say the conservative rhetoric compelled him to act.

Rather, they're talking about the "toxic rhetoric" and hate-filled "atmosphere" that can "lead unstable people to believe this is an acceptable response." "[T]he kind that attracts sick minds like Loughner, the kind that only reinforces their paranoia, the kind that finally pushes them over the brink." Unless you can prove Loughner never heard this political vitriol and wasn't influenced by it, don't bother arguing the point. 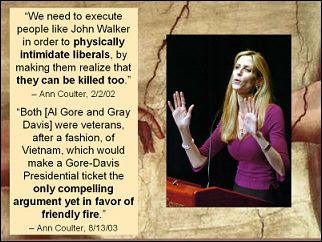