Some people are saying the racist joke on Mike and Molly is understandable because Mike's mom, the character who uttered it, is like Archie Bunker from All in the Family. They argue that her racist comment is similar to his racist comments, again exposing racism to ridicule. If liberals like me accepted Archie on TV, we have to accept Peggy too.

Nice try, but wrong. Not just a little wrong, but as wrong as wrong can be. Here's why:

For starters, I'm not even sure the mother is a confirmed racist. Wikipedia's description of her makes no mention of any racist atttiudes:I Googled the Peggy Biggs character and didn't find a long list of racial slurs she had uttered, or denunciations from outraged fans. I'm guessing this comment is much worse than her usual comments.

If the character isn't a racist who constantly says objectionable things, that makes this "joke" an anomaly. We have to wonder why she attacked Indians when she apparently doesn't attack other minorities.

Peggy's comment--characterizing an entire state full of people as worthless--is worse than anything I remember from Archie Bunker. Take blacks, for instance. True, Archie thought they had rhythm, ate fried chicken, and drove flashy cars. But he didn't label the entire race "criminals." His bigotry was more nuanced than that.

Fact is, Archie wasn't a hateful character as Peggy Biggs seems to be. He thought he was being kind and helpful by pointing out a minority's (imagined) flaws. If they only realized how they were inferior, he thought, they could improve their lot in life.

It's like the time the Dodgers' Al Campanis said blacks don't have the "necessities" to be managers or the buoyancy to swim. Campanis and Archie were well-meaning even if they were woefully ignorant.

Proving the point, Archie got over much of his prejudice as All in the Family went on. He grew tolerant of the Jeffersons and his Puerto Rican maid Theresa. He rejected his friends who wanted to join the Klan. He even joined a synagogue for his Jewish ward Stephanie.

He reserved his real hatred for armchair liberals like son-in-law Mike. Really, for anyone he considered a moocher or loser--Mike, initially, and everyone on Edith's side of the family. So his hatred was personal--directed at individuals who weren't pulling their weight--not racial or ethnic.

Perhaps more important, Archie was humiliated and shamed every time he said something racist or sexist. Mike and Gloria, Lionel and the other Jeffersons, neighbor Irene, cousin Maude, even Edith sometimes...pretty much everyone schooled him on why he was wrong. He never went unchallenged, never had the final word. His ignorance was never allowed to stand.

In contrast, the only reaction to Peggy Biggs's "drunk Indians" remark comes from Molly, who says, "Really? That's not what it says on their license plate." One might take this as a very mild rebuke, but it's more of a playful counter-joke. It does nothing to contradict the stereotypical notion Peggy planted in the audience's minds.

Finally, note the context of the two shows. In 1970, minorities were just starting to appear in the mainstream media. Ethnic humor--about Jews, Latinos, Poles ("Pollocks"), Italians, Irishmen, et al.--was still common. Along with the rest of America, Archie learned that such jokes were offensive to their subjects. And that what was acceptable in the past had to change.

In 2013, Peggy Biggs no longer has that excuse. Her character has experienced forty years of social pressure to rein in offensive "jokes." A slew of well-publicized controversies--Mel Gibson, Michael Richards, Don Imus, et al--have made it plain what's unacceptable. Peggy knows or should know that labeling an entire race is wrong.

Bottom line: Unless the 2013 equivalent of Mike Stivic slammed Peggy for her scornful racism, it's unlike anything we heard on All in the Family. It would've been offensive then and it's definitely offensive now. The only context that makes racist stereotyping "okay" is when the joke's on the offender, and that didn't happen here.

For more on the subject, see Stereotyping Explained to South Park Apologists, The Dudesons, Polish Jokes, and Minstrel Shows, and Okay to Stereotype in "Satires"? 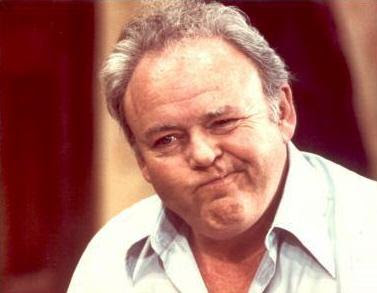 Email ThisBlogThis!Share to TwitterShare to FacebookShare to Pinterest
Labels: alcohol, All in the Family, racism, stereotypes, TV

The strength of Archie Bunker that has people defending him as nuanced, even now, is, I think, mostly due to the strength of Carroll O'Connor as an actor.