I quote educator Debbie Reese's American Indians in Children's Literature blog occasionally. Now here's an article about the woman herself:

By Rawan SalamehSome reports from Reese on her lectures:

Inspired by Students at University of Redlands and Sherman Indian School

Comment:  If I understand Reese, this is a surprising story. College-level students expected her to be a "dancing Indian" like their former mascot Chief Illiniwek. They couldn't deal with a real Indian who didn't fit their stereotypical notions. Their dissatisfaction with her was so great that it basically forced her to quit.

Wow. If an experienced Native professional feels pressured to change or leave, think what it must be like for young Native students. What are you supposed to do when people constantly challenge you? You can fight back, but that may cause stress and exhaustion. Or you can give up and go home where people understand you.

For more of Reese's thoughts, see Blue Dolphins Begins with Massacre and Lost Mesa in Fablehaven.

Below:  Notice the resemblance between Debbie Reese and Chief Illiniwek next to her? No? 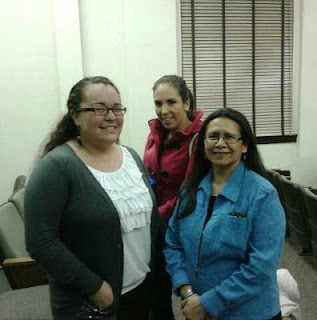 I am never surprised by how white people think Indians "should" be. Oh, you're an Oglala Sioux? And studying to be an astrophysicist? And you have a Twitter account? Funny, you don't look Indian...

Curiously, this is never said to the being on Facebook with a Kirby Sattler picture in his/her profile and lots of "wolf faces in the sky" art.