Sacred object handed back to Hopi tribe after ‘shameful’ Paris auctionAfter failing to stop the auction:Comment:  For more on the subject, see Auction House Sells Hopi Masks and Auction House vs. Hopi on Masks.

Below:  "The katsina was handed over to Hopi chairman and religious leaders by lawyer Pierre Servan-Schreiber and Survival International's Jean Patrick Razon (no photography was allowed during the handover itself)." 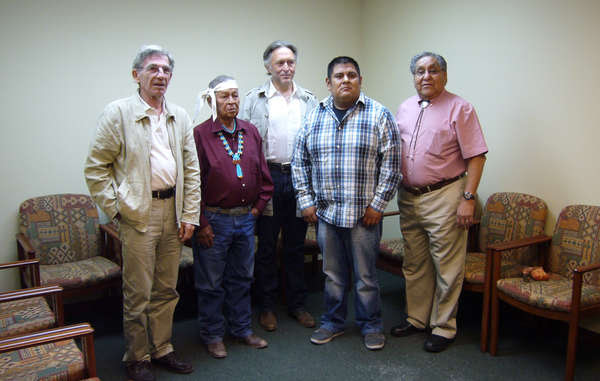 The judge rejected Servan-Schreiber's argument the morning of the auction. He declined to join an associate and Survival International official at the sale that afternoon. He said his attendance "would be considered provocation." Instead, he gave them money from his own pocket to purchase a mask so that he could "return it to the Hopi if I can."

Servan-Schreiber paid $7,845 for one of the masks, and met with Hopi leaders and tribal members last Friday to deliver it. In all, the relics sold for more than $1.2 million, the Agence France-Presse reported.