Johnny Depp previously starred as an Indian in his little-known indie film The Brave. If these old reviews are accurate, The Brave foreshadows Depp's unrealistic, fantasy portrayal of Tonto in The Lone Ranger.

By Godfrey CheshireHe also starred in the Native-themed movie Dead Man, though he didn't play an Indian in it.

By Chris WallaceAnd:Comment:  Depp didn't write, direct, or play an Indian in Dead Man but did in The Brave. Dead Man is considered great while The Brave is considered awful. I wonder why.

With his superficial and generic understanding of Indians, it seems Depp isn't qualified to make movies about them. Not if he has creative control, anyway. The Lone Ranger proves the point. 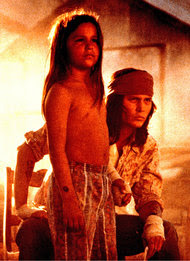