Apocalypto drops at the box office 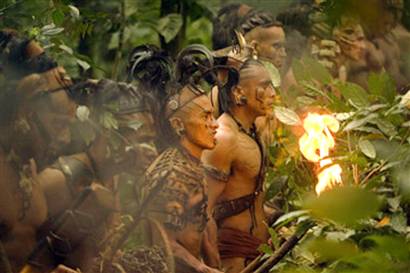 Finally got to the movies this weekend. It turned out to be the James Bond movie, not 'Lypto. For some reason, it never interested me.

I hope it opens up the door for more pre-1492 epics of the Americas, though.

Writerfella here --
Pre-1492 epics, such as PATHFINDER (2007), or KINGS OF THE SUN (1963) or THE SAGA OF THE VIKING WOMEN AND THEIR VOYAGE TO THE WATERS OF THE GREAT SEA SERPENT (1957)? Not generally an overworked genre in motion pictures, to be sure.
As writerfella has stated heretofore, APOCALYPTO predictably did well upon opening, but quickly would fall victim to the Xmastime film releases such as HAPPY FEET, ERAGON, CHARLOTTE'S WEB, THE PURSUIT OF HAPPYNESS, and ROCKY BALBOA, to quickly be followed by NIGHT AT THE MUSEUM. APOCALYPTO with its elegaic themes and ironic fabulations could not possibly have competed with the carefully-calculated family-and-popcorn-friendly fare. Neither would it have been able to stand up before the SPIDERMAN and HARRY POTTER and other summer blockbusters. That it was made and released shall stand as its eventual testament as a seriously-made film that speaks to the time in which it was made. All who never shall have seen it will have missed a piece of film history, which is likely what they would do anyway. writerfella saw the film, and he's happy...
All Best
Russ Bates
'writerfella'

That Apocalypto was made and released is a testament to a self-made filmmaker being able to finance and produce whatever movie he wants. If a studio had controlled Apocalypto, it might have toned down the violence and made it a better movie.