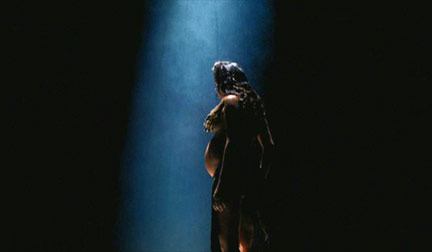 re: "His wife, however, appears to be heavier than water for reasons never explained. "

If I remember my Monty Python correctly, doesn't this just mean that she is not a witch?

....and Writerfella writes true. The animal many call a black panther is indeed technically a Jaguar.

Writerfella here --
Oh, pooh. Pregnancy DOES have that effect, as a woman thus has much bonded water within her body as well as several other pregnancy-oriented, chemically-complex bodily fluids, all of which are denser than water. Not to mention that her lungs and stomach cavity are compressed by the presence of the fetus and the expanded womb itself and so her breathing capacity is reduced. She still can float but not well. writerfella is happy he was born a male and gay at that, as the only fecundity he worries about is in his writing.
All Best
Russ Bates
'writerfella'

I doubt pregnancy affects a woman's ability to float. See the following postings for evidence:

Swimming is great exercise because it uses both large muscle groups (arms and legs). Though low-impact, it provides good cardiovascular benefits and allows expectant women to feel weightless despite the extra pounds added by pregnancy. It also poses a very low risk of injury.

Floatation Therapy allows you to escape the added weight of pregnancy by floating in a weightless environment, thus taking the strain off the body and spine. It promotes excellent sleep, a lovely sense of well being, and can help with all the aches and pains normally associated with pregnancy.

Writerfella here --
writerfella doubts quite seriously that, in APOCALYPTO, what Jaguar Paw's mate underwent was 'flotation therapy'. By the therapeutic descriptions posted, those techniques are supposed to alleviate stress, NOT CAUSE IT!!
All Best
Russ Bates
'writerfella'

The point of those postings is that pregnant women can float and swim without much trouble.

Okay... first of all, yeah, there are black jaguars. Black leopards are far rarer than black jaguars. Also, panthers are jaguars. If the author is referring to leopards as panthers, he is wrong. Perhaps he should do some sort of elementary school level research before making claims like this. Secondly, jaguars are not cheetahs. They are ambush predators. If anything, the unrealistic part of this is that the jaguar chased Jaguar Paw period.

Secondly, if he's going to discuss the 'absurdities' in this movie, he could have chosen ones that were actually absurd. I have news for him... not everyone floats. Some people just don't have enough fat to make them buoyant. In regards to the pregnancy issue, writerfella has the problem covered.

Now, if the author were to address the cultural or historical aspects of the movie (such as it was the Aztecs that encountered the conquistadores) he would have something legitimate to talk about.

As it stands, he's blowing smoke out of his ass and should stop posting articles about things he apparently knows nothing about.