"Horrified to be Indian"

Letter to the Editor about Apocalypto 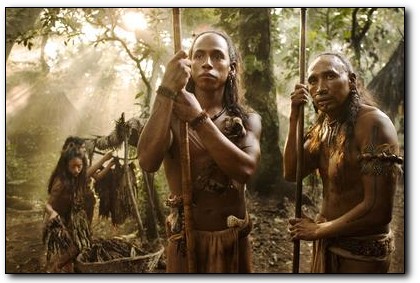 Writerfella here --
The only 'resonation' that writerfella gets from this seemingly well-intentioned editorial op-ed piece (it even uses the word 'amelioration' and SPELLS it correctly!) is, did Sherman Alexie say just how many times he ever has wished that he wasn't an Indian? In rebuttal, writerfella NEVER has wished that he was not a Kiowa Native person.
Otherwise, the phrase, "These kind of media..." is incorrect, as it should read, "These kinds of media...". A plural used as the object of a preposition is neutral in its influence on a preceding noun. If writing to an editor of a newspaper, one should be able to show that person that the writer is at least as educated as he.
All Best
Russ Bates
'writerfella'

Some info about Alexie from The Harm of Native Stereotyping: Facts and Evidence:

On the reservation, he and others would play cowboys and Indians because they were American, too, he says. Watching Westerns, he would root for John Wayne, he adds.

Like "data," "media" is transitioning from a plural noun to a singular collective noun. I use it this way and don't find it objectionable.

Usage note: Media, like data, is the plural form of a word borrowed directly from Latin. The singular, medium, early developed the meaning “an intervening agency, means, or instrument” and was first applied to newspapers two centuries ago. In the 1920s media began to appear as a singular collective noun, sometimes with the plural medias. This singular use is now common in the fields of mass communication and advertising, but it is not frequently found outside them: The media is (or are) not antibusiness.

Writerfella here --
Interesting that you, Rob, recognize that language evolves, but then again, you say that stereotypes and racial biases do not. Since the latter is based on the former, and such items are couched in language, why and how do such items escape evolution?
Unfortunately, your amelioration is incorrect. The English language is a polyglot, but its basal forms are Latinate. It best is demonstrated in misnomers about the word 'decimate'. The word means, 'to kill one in ten'. But media MISUSE of the term has led to its meaning slowly becoming 'destroy' or 'devastate' or 'destroyed'. Thus, 'media' becoming 'medias' is incorrect. writerfella saw a sign in the Anadarko Indian Health Center that read 'memorandums'. The correct form was 'memoranda' and he wrote a new sign which he placed on the wall that used the correct word. The sign is there now. That Latinate terms become corrupted linguistically does not make them correct. Defense of same means that a particular term can be changed if the expressing intelligence wishes to make words into forms that justify one's own points of view. Language always is re-invented by each successive generation of humans. But re-invention for the justification of an opinion never should be allowed. writerfella very much is sensitized to such re-invention because his own operant vocabulary in the English language is rated at 325,000.
If you agree that the very tools of your method of expression exists outside your own control, then you have lost the principle. Certainly writerfella, if his tools wre lost to him in the same fashion, would then retire to Fiji and start to learn French.
All Best
Russ Bates
'writerfella'

I'm not sure if stereotypes evolve, but our collective understanding of them does. For instance, about 99.9% of the population used to think Indians were savages. Now maybe only half or 2/3 of the population think that.

Languages evolve. Correct is what the majority of speakers says is correct. For instance, "gay" now means "homosexual" more than it means "cheerful."

I quoted the current dictionary definition of "decimate": to destroy a great number or proportion of. E.g., "The tsunami decimated 3/4 of the buildings along the beach." This definition isn't even in question any more; it's the standard one.

I also quoted a current usage note on "media." Here's another one:

Many careful writers insist that the words data and media are Latin plurals and must, therefore, be used as plural words. The singular Latin forms of these words, however, are seldom used: datum as a single bit of information or medium as a single means of communication. Many authorities nowadays approve sentences like

My data is lost.

The media is out to get the President.

Even textbooks in computer science are beginning to use "data" as a singular.