By Richard Schickel, film critic for TimeSchickel expects Apocalypto to do about as well as the splatter flicks it resembles: 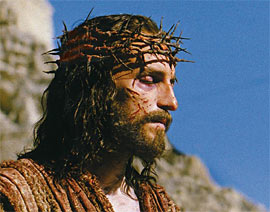 I'm always suspicious when white Hollywood woos the Native vote and or opinion on controversial Indian themed movies. Why did Mr. Gibson and "Disney" choose to go this route? Did they think that by getting a whole tribe (Comanche) behind their project that it would some how legitimise the overblown violence and possible negative stereotyping of native people.
If I remember correctly, wasn't it Disney that trotted out that one lone Indian to agree with them when they released Pocahontas?
I'm still on the fence about Apocalypto, I don't know whether I should see it or not.

Russell Means (Powhatan) was, er, a chief advocate of Disney's Pocahontas. Which is ironic considering he's denounced Hollywood and blamed its Jewish executives for stereotyping Indians.

Writerfella here --
If it'$ true, Ru$$ell Mean$ i$ not one of the 'expert$' on the $ubject and certainly i$ far from clo$e to being objective on topic$ that have laced hi$ own wallet$ and bank account$ $o ful$omely and well $ince the hi$tory of AIM'$ pa$t prote$t$.
By the bye, Richard $chickel i$ no better, in that he get$ hi$ film copie$ for hi$ review$ directly on tape$ or DVD$ from the film $tudio$ and watche$ tho$e $hown in hi$ own in-hou$e movie theater. What about the re$t of Mel Gib$on'$ film? Did Richard $chickel'$ copy only have the $cene$ he $spoke about? Que$tion$, que$tion$, que$tion$...
All Best
Russ Bates
'writerfella'

Writerfella here --
POSTSCRIPTUM: writerfella now knows how and why Richard Schickel felt safe in his 'predictions' about the box-office fate of APOCALYPTO. The film was released in front of the upcoming Xmas week releases and so certainly its box-office will suffer once the Xmas films are released. It's rather like seeing the SuperSonic Transport crash on a European tourist town and then calling your broker to sell your stock shares in the SST corporation. It has to happen...
writerfella and his photojournalist cousin went last night to see THE PURSUIT OF HAPPYNESS. Once the film had played, writerfella knew that Will Smith will win the 2007 Academy Award for Best Actor. He even can cite the exact scene in the film where the award was won. Ken Watanabe (LETTERS FROM IWON JIMA) and any others (Forrest Whittaker of THE LAST KING OF SCOTLAND)to be nominated do not stand a Chinaman's chance. Now, PURSUIT will have to fight it out with FLAGS OF OUR FATHERS and LETTERS and the other films yet to be nominated, but it stands near the forefront to win Best Picture. Best Director, well, let them fight it out.
writerfella, as a member of the Academy, will vote his conscience and his experience once having seen all of the nominated films and performances toward which he is eligible. But somehow it is nice to know ahead of time how his vote has been swayed...
All Best
Russ Bates
'writerfella'

Based on the Oscar buzz I've seen, Forest Whitaker is still a favorite to win the Best Actor award. If not him, it may be Peter O'Toole for Venus, Leonardo DiCaprio for Blood Diamond, or Jack Nicholson for The Departed. Will Smith will be lucky to get nominated.

As for Best Picture, the nominees are likely to include Letters from Iwo Jima, The Departed, The Queen, and Babel. I'm guessing The Pursuit of Happyness (and Apocalypto) won't be among them.

This is a good place to mention that Apocalypto got one Golden Globe nomination: for best foreign-language film (!). How about that?