Apocalypto now:  A review of ApocalyptoComment:  Judging by the reviews I've read, Apocalypto is unlikely to get any best-movie or -actor nominations. It may get some nominations for its visuals--e.g., cinematography, art direction, costumes, or effects. 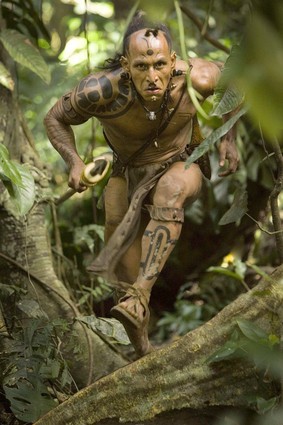 Writerfella here --
Even writerfella opined that APOCALYPTO might not do well in box office receipts. But that was before he saw the film. Having seen the film and in a packed, no-seats-left theater, his opinion has been changed. No matter that certain films do well on opening day and then have no 'legs' thereafter, APOCALYPTO played well and fast in this region. In Lawton, informants have called to say, the theaters showing it had to book extra showings to accommodate the crowds wishing to see the film on Friday night. The Lawton area is Comanche territory and the nominal star of the film is Comanche-Cree, which would explain a lot. What remains to be seen is if the film continues to play well in that city, as well as other venues.
And the question becomes, as stated in other posts on this site, will the film perform poorly and then also fail in its possibilities for industry awards. writerfella knows that certain folk of certain religious persuasions hold sway in the entertainment industry concerning awards. And Mel Gibson has visited himself with a certain religious segment's wrath, owing to his Road-Rage-Warrior incident of last May.
writerfella is reminded of an earlier victim of that group's wrath back in the early 80s. The Academy-Award-winning actor, Cliff Robertson, had angered industry people because he informed authorities that an executive at Columbia Pictures had embezzled actor residuals. The resultant scandal verified that the embezzlements had occurred and the man went to prison. Immediately, Cliff Robertson was ostracized by the film and TV industry. Suddenly, he could not get an acting job in movies or TV to save his life. To keep his head above water, he worked for PBS and took commercial voice-overs and acted in independent films. About the time that writerfella was attending the University of Miami in Florida, which is an entertainment-industry-oriented school, the speaker's bureau hired Cliff Robertson to come and speak about acting. This was one of the ways that Mr. Robertson was able to earn a living, by taking college seminar appearances for pay. It was announced that Cliff Robertson would appear at UM as a speaker. Oddly, there was no outcry, no boycott, no demonstration over his coming appearance. writerfella attended the speech and he was happy to see one of his favorite actors appear in person. The speech was given, it ended, and then a group of students began to flush the capacity crowd toward the exit doors. writerfella went to the stage because he wanted to get Cliff Robertson's autograph. But at the stage, several young men tried to stop him. "Mr. Robertson has to leave," they said, "and so he doesn't wish to be disturbed." The event had gone so well that writerfella just pushed his way past these young men and went backstage. And there was Cliff Robertson peeking out the closed curtain, watching the crowd exit the auditorium without coming to the stage. No one was there but he. writerfella walked up to him and Mr. Robertson looked at him, very much relieved. writerfella asked if he would autograph his copy of the novel, FLOWERS FOR ALGERNON, upon which was based the Academy-Award winning film, CHARLY. Cliff Robertson looked happy but he said, "I didn't write this." To which writerfella replied, "But you WERE Charly!" And so he signed it, looking very pleased indeed. writerfella even took a Polaroid photo at that moment, and it is one of his best souvenirs. Cliff Robertson shook hands with writerfella and hugged him, because writerfella was the only person to come backstage to see him. Back in the auditorium, the young men surrounded writerfella and were very angry. "Why did you spoil this? Why did you go to see him? We wanted him to know we don't like him!" To which writerfella said, "BFD! Mr. Robertson is someone I wanted to thank for his work, and what you wanted is unimportant!" And he pushed his way past them and went to the Rathskellar bar to show the picture and autograph to his friends. Only later did writerfella understand what it all was about and then realize that he had stepped on oppression of another human being. writerfella does not allow anyone to oppress him, and then he realized that he does not like oppression being directed at anyone else.
writerfella still has that photo of Cliff Robertson, smiling and signing writerfella's book. He will show it to any and all, if they are interested...
All Best
Russ Bates
'writerfella'