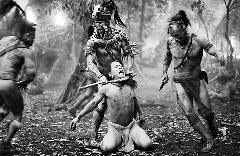 Here we go again. I won't waste my money. I hope no one else will.
Linde Knighton

If Apocalypto were just stereotypical, I might feel obligated to see it. So I could report on it more accurately, if nothing else. But I won't waste my money because the movie is so bloody violent. No way do I encourage filmmakers like Gibson to produce more gorefests. The last thing we need are horror flicks featuring Indians as Jason or Freddy.

Writerfella here --
Here again, the post as quoted is prosilly incorrect. It speaks of Mel Gibson purportedly getting "his ass kicked all around Tinseltown by the Jewish community...," then it says that "'Apocalypto' seems to be Gibson's translation of that lesson..." Except that principal photography of APOCALYPTO was finished and the film was in post-production when Mel Gibson had his famous 'Road-Rage-Warrior' incident and so it was not the other way around as stated in the posting. It is one thing to be scatologized for ignoring history and quite another to ignore recent chronology just to be able to complain.
All Best
Russ Bates
'writerfella'

Writerfella here --
POSTSCRIPTUM -- And writerfella remembers the humongous Christian outcry over Martin Scorcese's THE LAST TEMPTATION OF CHRIST (1988) and even was witness to a huge New York City crowd with signs protesting the film as 'blasphemy' in downtown Manhattan. That theater was right across the street from the Hilton where writerfella and his guest were staying for writerfella's appearance on "The Wheel Of Fortune" TV game show, which was being taped in Radio City Music Hall. News crews were everywhere and writerfella watched from the street close enough to hear the interviews. 'Have you seen the film?' the TV people asked, to which the answer invariably was, 'No, no, and hell no!'
That convinced writerfella and his friend instantly to break through the protest lines and pay to see the movie. Upon exit, the news crews still were there, though the protesters were filtering away in the October cold. writerfella was asked on-camera, 'Have you seen the film?' To which writerfella answered, 'Yes, and I liked it. It's very much like Ambrose Bierce's AN OCCURRENCE AT OWL CREEK BRIDGE, because Christ imagines that he lived like anyone else and even took a wife, in one second of doubt as he dies on the cross.'
And we saw ourselves on local TV later that night, to which the news anchors said, "Thank heaven somebody knew what the film was about!"
All Best
Russ Bates
'writerfella'

I think the original poster covered himself by using the phrase "seems to be." Apocalypto seems to be a response to Gibson's Jew-baiting incident, even if it isn't and can't be.

Also, your critique of the chronology ignores a larger point. Gibson has been at odds with the rest of the world for years. People have criticized his Holocaust-denying father; they've criticized his Passion of the Christ.

One could read Apocalypto as his response to this criticism. "You think my films were violent and ugly before? You haven't seen anything yet."

The point of this posting was that Natives have a host of reasons to protest this film. That Gibson denounced Jews is the least of them. The real problem with Apocalypto is its racist stereotyping, not its proximity to Gibson's drunken tirade.

Writerfella here --
Sorry about your misreading of the principle, but writerfella has known one particular truth about films and filmmakers. You get ALL good reviews, and you know they all missed the point, which likely is your fault. You get ALL bad reviews, and you know they all got the point but instead are interpreting it in their own fashion. It is when you get MIXED reviews that you know you are doing something right. APOCALYPTO's reviews have been mixed and that is it's best sign of all...
All Best
Russ Bates
'writerfella'

As a Native American (Oneida) I have seen and own the movie. I love it. I think people should know that yes, indigenous people fought each other. Everything wasn't peaceful and pleasent as some people believe. I love the idea of using an all latin/native cast. It depicts our different religions and the wars we fought against each other. That was and is the reality today, maybe not physical wars, but every Native that lives/lived and grew up on their reservation knows of their politics, and who doesn't like whom, and what families can't stand each other. So before people cast a blame on one white person. Maybe we should face reality and know that our history before the 1490's wasn't all pleasant and we didn't all co-exist ALL the time.

The critics didn't criticize Apocalypto for showing Natives fighting Natives. They criticized it for portraying the Maya as bloodthirsty barbarians rather than a sophisticated civilization of the ancient world.

I give Gibson credit for using Native and Latino actors. I would've given him more credit if he had found and used Maya actors for the lead roles.

Response to Russ: With your vague writing, I don't know what principle you're talking about. I'll simply repeat that Natives have a host of reasons to protest this film. That Gibson denounced Jews is the least of them.

So good reviews are the only thing that indicate you've made a bad movie? This must one of the silliest things I've ever heard. Thanks for demonstrating how little you know about the act of criticism.

As a native of Mexican nationality, I had mixed feelings about this movie. I was glad that somebody finally made a movie about pre-hispanic peoples. I also enjoyed the symbology and prophecy deisplayed. What I didn't enjoy was the depiction of exagerated sacrifice. Every human nation has practiced sacrifice at one time or another. While sacrifice was certainly important to all our ancestors, it would have been unsustainable to kill that many people constantly. So I think that this depiction of sacrifice in the Gibson film feeds the stereotype and justification of Hispanic America that has led people of Native origin whether it be mixed or not to reject their past and Native birthright. I'm speaking very generally of course, and am also totally against the myth of "Mestizaje" and the labeling of all people who come from "latin America" as hispanics or latinos.