The American Indian Network Diversity Report Card for 2007 also reported on the controversy surrounding this year's "Bloodline" episode of CSI: Miami. It's interesting to see how Hollywood's Indians protested and how CBS responded.And:Comment:  Scalping was far from the only problem in the episode. For the full story, see CSI: Miami Butchers Indians.

Rather than send a letter and wait for an apology, I say publicize the issue and let the chips fall where they may. I don't know if anyone learned anything from my analysis, but so far AIFTV's efforts have led to nothing but a possibly worthless "verbal agreement."

P.S. I checked and the episode was titled "Bloodline," not "Bloodlines." As we've seen, AIFTV is a little sloppy when it comes to the facts. 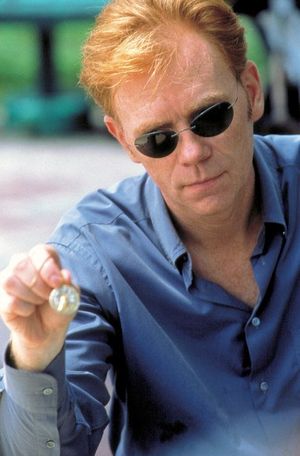 Writerfella here --
Sloppy? They practically were slobbering. Can you not see that all of that consists of little more than jingoistic 'going through the motions?' Mark Reed and 'Sonny' Roubideaux are little more than Quisling Judas Goats who circumvent more meaningful protests and/or actions by appearing to be lodging protests of their own. The main purpose served is the keeping of themselves in the limelight and at the forefront in the industry. You always can tell which circus it is because the same clowns always are out in front...
In 1989, writerfella was contacted by a screenwriter who seriously wanted a crime for his screenplay that, by its very nature, would reveal the perpetrator to be Native American. writerfella accepted the tech advisor role and cogitated for several days. And the scene went like this: wealthy developer and wife awaken in their huge house to find an intruder in their bedroom. Intruder cocks a shotgun, then fires into the ceiling. Man and woman scream and madly scramble for the bedroom door. As they run down to the first floor, the intruder appears at the top of the stairs and fires into the ceiling again. Man and woman run through the kitchen and out into the garage, hearing a third blast from the dining room behind them. The man triggers the automatic garage door, finds hidden car keys; they climb into their car to make a getaway. But as it starts, their car blows to smithereens with them inside. The intruder escapes into the night without any direct attack on the couple.
Native American crime? Yes, as the intruder stampeded them to their own destruction, much as his ancestors stampeded mammoths, bison, or even horses over the edges of cliffs...
All Best
Russ Bates
'writerfella'

This is the first time I've seen AIFTV's actual report rather than a summary of it. You haven't even seen the report, since I've posted only excerpts of it. Therefore, neither of us can rightly judge whether AIFTV is just "going through the motions."

Your stampeding scenario is clever, but it doesn't necessarily identify the shooter as an Indian. A non-Indian could read about the practice of stampeding animals and emulate it. His motive might be to frame an Indian for the crime.

Even scalping could be done by a non-Indian trying to imitate an Indian. About the only thing that would qualify is something involving religious lore or artifacts that only Indians know about. And something like that should never appear on a TV show, obviously.

Writerfella here --
Ratz! writerfella deliberately left off the plot of the screenplay because it still is in option circulation after all this time and he felt it wasn't his place to provide any 'spoilers.' It is called GHOST DANCE by Thomas McElvey Cleaver, and indeed does deal with a Native defendant who stands falsely accused. The 'Native crime' represents a portion of the circumstantial evidence against the defendant. A half-Hopi woman lawyer has returned from New York to offer her legal skills to her own people and her first client is the alleged killer, who was her high school sweetheart. Now, writerfella just formulated the crime and had nothing to do with all of that other guff...
All Best
Russ Bates
'writerfella'