Lyons:  The curious return of 'race' in 2007Comment:  I'm not sure if 200 is an adequate sample or not. But it's a statistical question that has a definite answer.

If 200 isn't enough people, then some number (2,000?) is enough. If Nike reached that number, it would know for certain if Native feet are statistically different from non-Native feet.

Until it reaches a sufficient number, neither Nike nor Lyons knows whether there's a difference or not. Therefore, neither can say whether the shoes are racist or not. 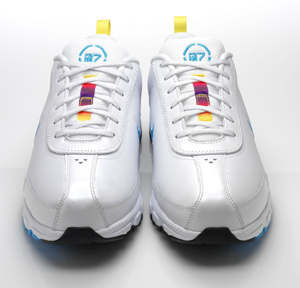 Writerfella here --
The only reason a pair of shoes could be called 'racist' is if they are not intended for other races or even to be sold to other races at all. "If Indians can have something I can't have, then it's racism, pure and simple!"
Ya want to know about a 'racist' bit of footwear? Natives rarely have that apelike and less-than-evolutionarily-nominal gap between the great toe and the second to on each foot. Thus, it becomes problematical to wear the stupidly, currently fad-fashionable shower flip-flops! When writerfella was in the USAF, everyone else got blisters from their new jump boots, Chuka boots, or the dress uniform low-quarters. That is, except writerfella, as the only blisters he ever got were in between his toes from those blasted shower shoes!!
All Best
Russ Bates
'writerfella'

I'm not sure Lyons is claiming the shoe itself is racist. I think he's claiming that the assertion that Native feet are different and need a different kind of shoe is racist.

The real question is whether any of these assertions is true. If it isn't, then people are making unfounded and unscientific claims. In that case, their beliefs are arguably "racist."

Writerfella here --
Sickle-cell anemia was an evolutionary response to an environment rife with Malarial infestations, especially Africa. The hemolytic parasite found itself less able to adhere to malformed red blood cells and the Malaria sufferer tolerated the disease much better. Now, remove the potential Malaria patient from those environs and the sickle-cell adaptation becomes a disease all its own. How is such a state of being to be considered 'discriminatory,' if it happens to be a medical truth? writerfella sent an e-mail to Indian Country Times for Mr. Lyons, giving answer to his question about what constitutes a Native American foot. The lack of the anthropoid toe gap AND the fact that Native Americans have been wearing EuroMan's footwear for less than 150 years, all have been made known to him...
All Bet
Russ Bates
'writerfella'