Native American stereotypes perpetuated by sports mascotsAnd:Comment:  I'm amazed that some people still don't get this author's point. Namely, that when you depict Indians as chiefs and "braves," that becomes the dominant image in people's minds. People see Indian mascots and believe Indians still live and look like that.

Below:  What most people think of when they think of Indians. 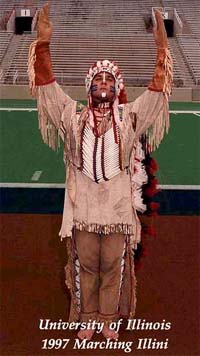