Talent manager Michelle Shining Elk has gone out of her way to shield Saginaw Grant and the Dudesons from criticism of their participation in Cowboys & Findians. She posted this item on Facebook Sunday:Another person who denies the obvious influence of movies. Another apologist for racism and stereotyping against minorities...sigh.

In response I posted this innocent query:

I wonder where Native stereotypes came from if not from old movies. I guess they spontaneously burst out of thin air?

This led to the following debate with her and others:Rob replies

"The public" isn't an answer. People aren't born with knowledge of Indians. They get it from somewhere. The question is where.

Wild West shows were forerunners to Western movies. They stereotyped people in the exactly the same way--as whooping savages on the warpath. Indeed, their panoramic spectacles were similar to the big-screen experience. It's absurd to argue that one kind of phony show could influence beliefs but not the other.

Besides, few people have seen Wild West shows, so what's caused the stereotypes since the early 1900s? Why didn't they die out with the Wild West shows?

Museums? What museums? That must be a joke, since only a tiny fraction of Americans visit museums.

Magazines? What magazines? Another funny joke. The US magazine readership is small compared to US movie and TV audiences.

Besides, magazines and picture books are forms of media. Glad you agree with me that media is the problem. The only question is why you'll point to some forms of media but not others.

Edward Curtis photos are another form of media, thanks. Amazing that you think still photos would have an effect but not moving pictures. Explain to me why that is. I'd love to hear how one can affect public perceptions but not the other.

Toys are the source?Last time I was at Knotts Berry Farm, the show didn't include Indians. It was more of a stunt show than a Wild West show. And only a tiny fraction of Americans have seen it. It's less than a drop in the bucket where the whole country is concerned.

I don't think I've seen a museum or curator listed as a source for a Native-themed drama. Museums certainly weren't a source for the Dudesons. And the point is that Americans don't visit museums, they watch movies and TV shows. These shows are conveying and perpetuating stereotypes even if the stereotypes originate somewhere else.

Toys? There was a huge outburst when McDonald's gave away a Custer toy with its Happy Meals in South Dakota. And another huge outburst at the King Philip's War game in New England, including a street rally in Providence. So you're flatly wrong about that.

Besides, people protest in proportion to the offense, and the Dudesons episode was the most offensive display of racism in recent memory. It's more deserving of protests than any toy I know of.

From toys on up...to stereotypical movies and TV shows like Cowboys & Findians. If that's what you mean, I agree. 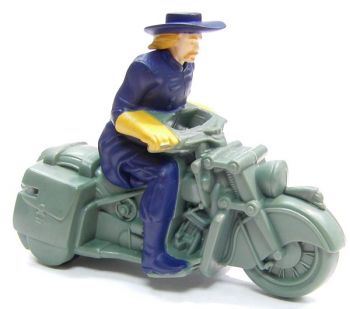 Jack Valenti as a source for movie criticism...hysterical. Why don't you quote John Wayne too while you're at it?

So much for Valenti's childish defense of movies. We could apply it to every other form of media and "prove" that none of them have ever affected anyone's perceptions. We'd arrive at the absurd position that stereotypes can't exist because no form of media can convey them.

Still not clear why you're indicting every form of media but the most obvious one: the silver screen. I guess it's because you work in the industry. You're afraid to bite the hand that feeds you.

Fortunately, I don't face the same moral compromises. I call 'em like I see 'em. Repeat: The Dudesons episode was the most offensive display of racism in recent memory. Anyone who defends it deserves the "Uncle Tomahawk" label.

Shining Elk respondsSorry if I used too many big words and bored you, Michelle. Next time I'll try to write down to your level.

"Stereotype is just another word for discrimination"...that explains why some of us are protesting the Dudesons' stereotypes. It doesn't explain why you're defending them. I guess you don't mind discrimination any more than you mind stereotyping?

And...is that it? Thanks for proving you don't have a shred of an argument. You couldn't touch any of my claims, so you insulted me instead. A classic case of blaming the messenger for the message.

Or did you get a teenager to write your response for you? I can't tell since it sounds so juvenile. Books, education...ooh, scary! Really, your junior-high level of "debate" is sadly lacking.

Why don't you call MTV and ask them to give you, Saginaw Grant, and the Dudesons a humanitarian award? You know, for all you've done to promote accurate depictions of Indians in Hollywood? I'm sure they'd be willing to congratulate you for your apology on their behalf.

Yeah, movies and TV are harmless, parents are to blame...great. You couldn't have done better if they'd paid you to shill for them. You keep doing what you do best, Michelle...PR flacking for those who need it. Leave the reporting and analyzing to the rest of us.

Let's close with a few Native writers and thinkers who understand the problem better than you do. You know, the crackpots Natives whose views I share in my blog all the time? From The Harm of Native Stereotyping:  Facts and Evidence, enjoy!For more on the subject, see "What Americans Know ... Comes from Movies," Visual Verisimilitude in Movies, and "I Thought John Wayne Killed You All."

Rob are you a critic or a writer? I believe you have an identity crisis especially when you resort to attacking people. Your quotes are only from a very few of Indian people, that doesn't count or is it the voice of the majority. And get original and stop copying and pasting from Facebook what people say. That's plagerism and taken without their permission. Better go back to school and take another creative writing class.

Rob, you have mentioned Saginaw Grant in many of your blogs. I feel you should give Mr. Grant the courtesy and contact him directly either by telephone or by e-mail. He can easily be reached through his management team as well. I feel that perhaps you should hear his side since you have written much about The Dudesons. Youhave heard from the protestors and how they feel about it all and I just think that it would be fair for you to hear another side and then write about it. I know that some of your information has come from other people's Facebook wall and you are only getting bits & pieces of information. I am asking nicely that you at least give Saginaw that respect and write about what he has to say. I see that you write for Pechanga.net and he is aware of that. You can easily meet Mr. Grant there also as he has many close friends there at Pechanga and attends their pow wow every year.
Thank you, Rob.

Let look at the word Plagiarism, or plagiarize:

take (the work or an idea of someone else) and pass it off as one's own.
• copy from (someone) in such a way.

Now did Rob take Ms. Shining Elk's writing and pasted his name on it claiming it as "one's own"? Obviously not since Rob has opposition towards her way of thinking. Your use of using the word Plagiarism is weak.

"Your quotes are only from a very few of Indian people, that doesn't count or is it the voice of the majority."

You contradicted yourself. You criticize Mr. Shmidt but yet you ask him for answers. When I read stuff and come across words, places, events, or people that I am unfamiliar with I put in some research and find out for myself. Thats the beauty of infor-mation, one person doesn't and can't know it all. We can learn something from everyone if we let ourselves learn, or we can protest.

As for Saginaw "King of all the Indians" Grant, i don't know what to think. Quite shocked actually. Here's some info on the episode and Saginaw's evidently "uncomfortable" contribution to the Dudesons:

He may be a good person and role model but something like this can easily degrade all that he has worked for in the Native Communities.

Rob, regarding The Dudesons, it could have been "Russel Means, King of all the Indians." lol, his stance on the usage of indian would make more sense.