I dunno, Chief Chamberlin. A sneaky Native sorcerer might realize it's too obvious to attack the fish farm directly. Better to attack a symbol of Norwegian pride like the Olympics team. Presumably that would teach the Norwegians to be more humble and listen to the hunger strikers opposing the farm.

Wasn't that the thinking behind the 9/11 attack on the World Trade Center, which had no strategic value but symbolized American might? Same with the Norwegian Olympics team.

Ahem. This item goes into the Stereotype of the Month contest for the claims that 1) Indians have mystical powers and 2) Indians would try to hurt people in underhanded ways.

It's kind of funny to hear an indigenous Norwegian shaman accuse his indigenous Canadian counterparts of black magic. Is he implying that he also casts spells on people when they don't cooperate? Or is he foolishly stereotyping Indians and thereby stereotyping himself?

For more on Indian curses, see Indian Curse in Saturday Night Live and Medicine Man Ends Talladega Curse. For more on the subject in general, see Magical Negroes and Indians. 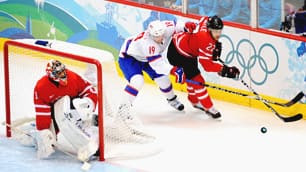 interesting article... just a note from a local "canuck" that we prefer to regard this group of people as our First Nations (rather than aboriginals, indigenous, or indian).

I know Canadians prefer the phrase "First Nations people" to the word "Indians," Andrea. That's why I used "First Nations" in my first comment.

But you must know Americans overwhelmingly prefer "Indians" to any other term. Since I'm American and I was generalizing about the shaman's claims, "Indians" was the appropriate choice.