For all I know, people may have known the information in Ghosts of Machu Picchu for decades. Whether the info is new or old, it does paint a coherent picture of Machu Picchu's story.

According to Ghosts of Machu Picchu, Pachacuti, the founder of the Inca empire and first emperor, ordered Machu Picchu built. (It took so long that it couldn't have been anyone else.) The place served as a royal estate, a peaceful retreat for worship and rest with the royal staff. 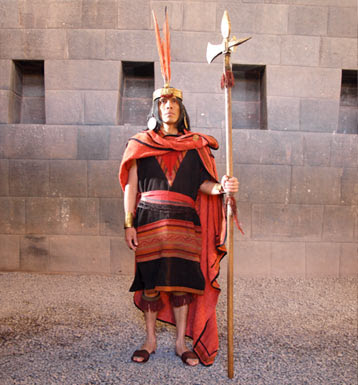 Ghosts of Machu Picchu endorses the "sacred landscape" theory. The Inca derived power by being physically connected to mountains, which they considered deities. Machu Picchu was perfectly situated for this belief. It had "views to sacred peaks, proximity to holy water, and alignment with four powerful mountain gods."

That made it a "formidable symbol of Inca power," a "spectacular boast" by Pachacuti about how great and godlike he was. Every time the Inca looked up, they could see the living deity in his divine location.

The famous stonework isn't necessarily a mystery. The Inca used a granite quarry on the site. They laboriously pounded the stones into shape with other stones. They rolled them into place with logs, then pounded off the rough edges until they were smooth.

What's interesting is the complex engineering needed to make the site usable. Before anything else, the Inca built terraces to shore up the mountain and hold it in place. They put layers of gravel and rock in the terraces and under the site itself to draw off the 76 inches of rainfall per year.

Fifty to 60% of their effort went into this underground drainage system. Without it, the soil under Machu Picchu would've turned to mud and slid away. 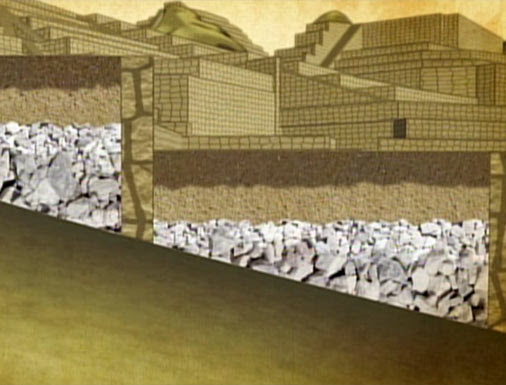 The short-lived Inca empire was devastated by disease and civil war. People drifted away from Machu Picchu and didn't return because they were occupied elsewhere. All but the royal servants forgot about it. When the Spanish came, it basically had been abandoned, so they never learned about it. It remained untouched until Hiram Bingham rediscovered it in 1911.

An interesting note about Bingham: He thought he had found Vilcabamba, the undiscovered last stronghold of the Inca. Why? Because he thought 4/5 of the skeletons he found were women. Which meant they were the Virgins of the Sun who would've accompanied the emperor to his final redoubt.

One problem: Later researchers reexamined the skeletons and learned many of them were men. Bingham had assumed they were women because they were small. But all Peruvian Indians are small compared to Europeans. Oops.

Meanwhile, no one has ever located Vilcabamba. It remains a real Inca mystery.

Ghosts of Machu Picchu effectively uses recreations and computer graphics to enhance its story. It answers all the questions it sets out to answer. It's one of the better Native-themed documentaries I've seen, and well worth your time.

For more on the subject, see Review of 4Real Peru and Simpsons Visit Machu Picchu.

Below:  "While impressive today, Machu Picchu would have been an even greater site to behold in the late 1400s, with gleaming white granite walls topped by golden-colored thatched roofs." 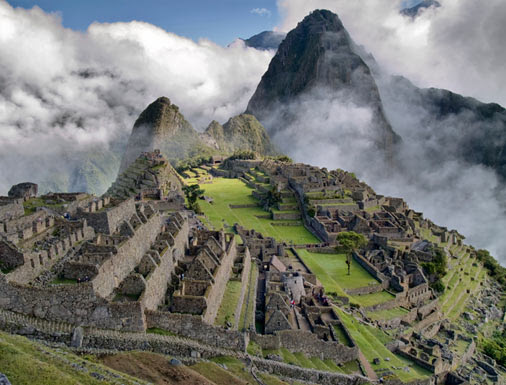