By Kim Buckley
Clay LomnethAnd:Comment:  The articles don't include pictures of the Husker fans, but we can imagine what they look like.

As it is, you can see the mockery inherent in the stunt. The sign conveyed a legitimate Indian claim, but the costumes conveyed illegitimate stereotypes. "Look at us," the costumes seemed to say. "We're a spectacle. We bear the same relationship to Indians that clowns do to non-Indians."

Whether it's intended or not, that's mockery.

The outcome of this controversy seems a good one. People discussed the issue and took steps to prevent it from happening again.

But note that 11 people voted against Senate Bill 15 and four abstained. So 15 of 29 people, a majority, couldn't bring themselves to vote for the resolution.

And you gotta love the thoughtless students and their apology. The most they've done in the past is dress up in "kilts and togas." They've never singled out an oppressed minority before.

So they've never dressed as stereotypical blacks or Asians or Jews. They singled out Indians for their first (and only?) ethnic stunt. But they claim they didn't mean to "single out a group of people."

"Well, yes, we singled you out, but we didn't mean to do it. We didn't know there were any Indians left to get offended. Honest Injun!"

For more on the subject, see Tricking or Treating Indians and Indian Wannabes.

Below:  Chief Illiniwek, a similar example of mockery. 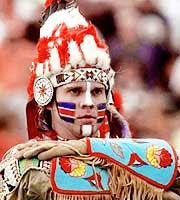 I am a white University of Nebraska student, who grew up un the Omaha Indian Reservation, which borders the Winnebago Indian Reservation. And personally I think this is a joke. As a nation we cater to the minority and it needs to stop. If they would have dressed as Scots, Germans or British, or probably even Jewish no one would care. This was a joke by students. A stunt. People are too influenced by todays society to see that, instead it might as well be a hate crime.