Another point on Only Whites Blame "Intergenerational Trauma"?:

If you need a helpful analogy for intergenerational trauma, think about John McCain or some other prisoner of war. Or anyone who comes back from war and suffers post-traumatic stress disorder.

Yes, some people will surrender to the pain while others will fight it. But pointing to intergenerational trauma is like pointing to the war as the pain's source. It explains why the pain is happening. People don't get depressed or "freak out" because they're stupid or bad...born without self-control...modern-day "savages." They do it because external forces impel them to do it.

Yes, they must overcome these forces to right themselves and move forward. Some have the capabilities and resources to do this, some don't. If they can't do it themselves, the solution is to help them. But blaming the victim for living in a tough, poor environment is like blaming a stressed-out soldier for going to war.

Let's not forget the evidence that historical trauma is transmitted biologically. This is far from something that liberals made up to excuse Indians and help themselves in the process. It's a real phenomenon with some scientific backing.

Below:  Adam Beach as Ira Hayes, who may have suffered both intergenerational trauma and PTSD. 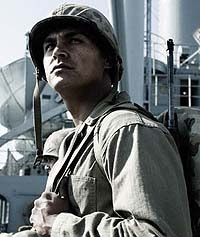