We Are the World for Natives?

A Native musician named Dominique Vantell Lonehunt has started a drive to create a Native version of We Are the World. Here's his pitch exactly as I received it:I thought this was a great idea that needed a total rewrite. (I leave it to readers to tally the number of capitalization, punctuation, and grammar mistakes.) My version:To the person who forwarded Lonehunt's message to me: This is basically the same message, but I've rewritten it totally. I trust you see the difference.

You can fill in the xxx's with actual information. Helping Dominique manage the process could be a good job for you.

If and when the project gets a few thousand fans, then we can talk about the next step. Perhaps I can get Indian Country Today to write an article about it.

Once it gets momentum in the national media, then the biggest Native stars will think about joining. Until then, it's unrealistic to expect people to jump into an unknown project by an unknown musician.

For more on Native music, see Natives Sing It Their Way. 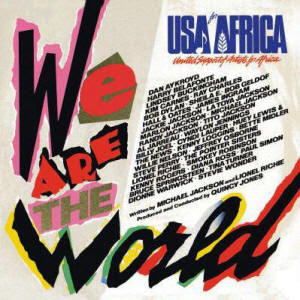 Never mind. Lonehunt apparently wants to do a whole album of raps, dubs, and instrumentals. He apparently expects big-name Native musicians to follow his lead and do it his way. He clearly doesn't understand the We Are the World phenomenon and doesn't have a chance in hell of replicating it.

man , it really pisses me off when i read and you refer to this guy in your opening line of your " letter " , and you say " A NATIVE " whatever by the name DOMINIQUE...BLAH BLAH...First of all this guy is not a NORTH AMERICAN INDIAN . HE IS FRAUD WHO IS AS BLACK AS THEY COME , SO IN FUTURE REFERENCE PLEASE DO NOT REFER TO THIS GOOF AS AN " INDIAN " IT IS VERY MISLEADING TO PPL WHO ARE NOT IN THE KNOW ABOUT THIS GUY....PPL HE IS NOT A NORTH AMERICAN INDIAN ...MAYBE A NORTH AMERICAN AFRICAN , BUT NOT AND I REPEAT --NOT-- A FIRST NATIONS PERSON ......AND FURTHER MORE PPL WHO HAVE NEVER EXPERIENCED " REZ " LIFE SHOULDN'T EVEN OPEN THEIR MOUTH ABOUT IT , BECAUSE THEY DON'T HAVE THE SLIGHTEST IDEA HOW IT IS , THEY ONLY KNOW WHAT THEY HEAR AN MORE TIMES THAN NOT , IT IS ABOUT AS FAKE AS THIS FUCKING GOOF DOMINQUE VANTELL LONG"HAUNT" PLEASE MAKE THE CORRECTION TO YOUR BEGINING OF STORY ...HE IS NOT AND WILL NEVER BE AND FUTHERMORE WILL NEVER BE ACCEPTED AS AN FIRST NATIONS PERSON BY ME OR ANY REAL " NISH "...S.P.S

Please remove the reference to this person dominque vantell long"haunt" as a NATIVE ...C'.MON he is the furthest thing .....