Some postings show how badly conservative Christian Bryan Fischer has distorted the truth about Indians.

By John LambAnd:American Indians to host The Gathering in Oklahoma City

American Indian Southern Baptist leaders will meet for The Gathering to consider ways to help American Indians connect to the Gospel.

By Carla HintonComment:  According to Falls, at least 5-10% of Indians are Christians. I think the percent is higher. For instance, Turtle Mountain has about 30,000 enrolled members with 10,000 living on the reservation. 3,000 Catholics is 10% of the former number and 30% of the latter. Including Protestants would make the percent even higher.

Moreover, many Indians blend Christianity with their Native religions. Do Christian churches count them all as Christians? Probably not, but they should count for the sake of this argument.

Fischer has implied Indians are avoiding Christianity because they're too dumb and blind to see its benefits. But a sizable minority of them are Christians. So the thing Fischer can't imagine happening has already happened.

Rather than fantasizing the value of Christianity, why doesn't Fischer do the research? Compare the health and wealth of Christian Indians to non-Christians after controlling for things like gaming revenues, access to jobs and healthcare, and so forth. Fischer believes the Christian Indians will be better off; I'm guessing there'll be no difference.

Unlike Fischer, Falls understands what the problem is. So does everyone who's ever talked to or read about Indians, including schoolchildren. It's not that Indians are too cowardly or superstitious to embrace the "light." It's that they hate Christians for their long history of lies and hypocrisy. For stealing their land and killing them in violation of Jesus's commandments.

How stupid do you have to be not to understand this? The first colonizers brought diseases with them, squatted illegally on Indian land, enslaved some of the Indians they found, and forcibly tried to convert others to Christianity. Fischer wouldn't accept that and neither would any other Euro-American. Why does the idiot think Indians should've accepted it?

Below:  "I pray that God will dispose of the Indians in our way," said the good Christian Pilgrim to himself. "If not, we'll have to dispose of them ourselves in about 15 years." 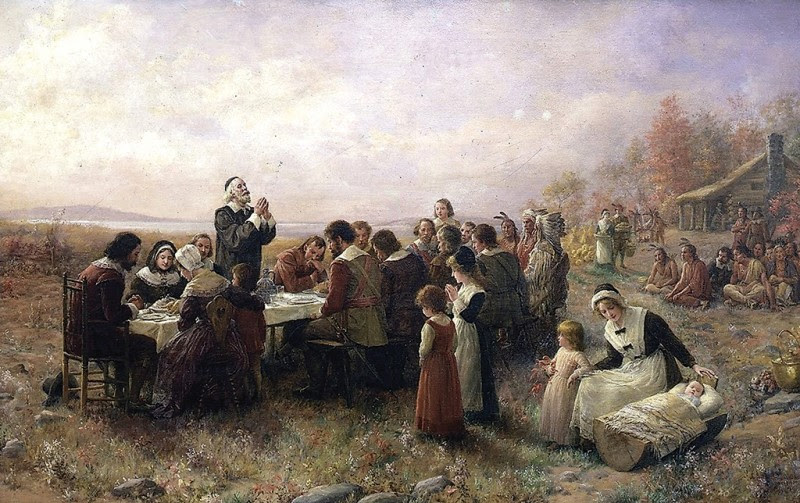 Fischer, well...A Nazi by any other name would reek just as much of chemical weapons.

I must be missing something here. Where is it carved in stone that Christianity is good for anyone at all?

When it gets to the point that Christians are divided against each other and Christianity itself comes in the form of Jim Jones, David Koresh, Jerry Falwell and Pat Robertson, how does one distinguish Christ teachings in any of these men?

I was raised Baptist Pentecostal and never felt any connection to God from this form of Christianity. It was divisive, bigoted, racist and discriminatory towards the poor. Today, I see Christianity as a form of government with bureaucracy, profit, and materialism all in a cohesive effort to exact wealth here on earth using the afterlife and guilt as weapons of conformity.

Especially after seeing how the Catholic Church mishandled and expanded pedopilia and then was pardoned through political and monetary bribery.

There are many non-believers and athiest that show more humanity and wisdom over religious zeals that have something to sell and expect good intentions to reward them when they pass on, even when those good intentions keep suffering continuous and go against everything we know to be moral and sane.

Religion takes a great idea and perverses it to the opposite ends.

I don't need religion to make my heart feel, my eyes open, my mind clear or my soul at peace.