A newspaper for the Seattle University Redhawks, formerly the Chieftains, defends its "red mohawk" photos:

Editorial:  No Redhawk mohawks?Comment:  The fans are obviously still attached to their beloved "Chieftains" nickname. To "honor" Chief Seattle, apparently, they've adopted mohawk hairstyles from a tribe 3,000 miles away and painted them red. Both actions contribute to the idea of Indians as "red savages."

In its defense, the Spectator says, "It is the duty of a newspaper to publish facts." It's also the newspaper's duty to exercise journalistic standards and choose which facts to publish. It's a fact that Seattle-area Indians weren't red and didn't wear mohawks. Did the newspaper publish that?

The Spectator explains that the photos "should be used as an opportunity to discuss sensitivity among students." Why the passive tense? Did the newspaper discuss the stereotypical message of the photos in the captions or an article? Or is it waiting for someone else to raise the sensitivity issue? It's the newspaper's job to present both sides of an issue, not to publish "factual" photos uncritically. 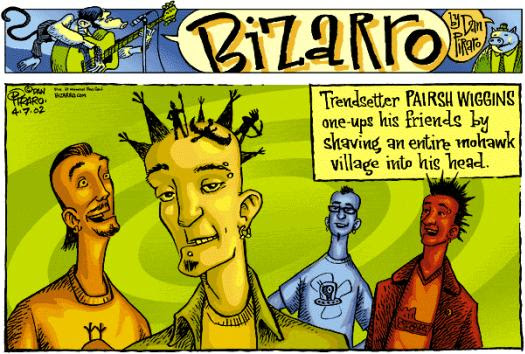