Some little-known facts about the continuing controversy that is Ward Churchill:

Why is U of T Listening to Ward Churchill’s Nonsense?

By Peter WorthingtonComment:  For more on the subject, see Churchill Loses Firing Appeal and Tim Wise on Ward Churchill. 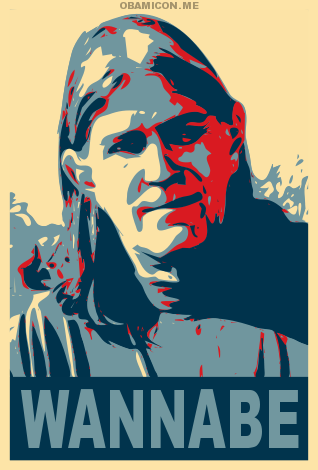 Churchill reminds me of that character in Sherman Alexie's Indian Killer. You know, the orphaned cop-turned-writer who tells a story of Gary Stu, the last Shilshomish.

I don't know if Sherman has ever heard of the term "Mary Sue", but from the way he described that character's books, he shows us how it's done.

Who is this guys family? All one has to do is find one biological sibling or relative to come out and state this guys real bloodline.

This is no feat. I have seen photos of him and I am convinced he is not Indian at all.

Meeting him would be even more interesting because I would drill him on his family tree, Cherokee or not!
His reluctance and lack of producing concrete proof only keeps him in bad terms with the Indian community.

He needs to come clean. Even the Kossa Dancers admit they are not real Indians and they dance.

@Burt, I believe someone did contact his family. It was a brother and his mother, and they both denied having any Indian blood. Or said that was the first time they had ever heard that, or something to that effect. I think that post is on here.

I never have any luck with the search function on this blog, maybe Rob can find the article quicker than I can. Rob?

I don't think I've done a post centered on Churchill's heritage claims. But you can read about them here:

You may be able to locate the Rocky Mountain News articles that investigated Churchill's background. The RMN found no trace of Native ancestors.