Whenever I post items about non-Indian celebrities on NativeCelebs, fans inform me the celebs are Indians because they have the proverbial Cherokee great-grandmother or equivalent. In other words, a small amount of "Indian blood." Under the one-drop rule previously used by whites to classify blacks, this supposedly makes them Indian.

It doesn't matter that they have no knowledge of or connection to a tribal culture. That most of their "blood" is non-Indian, they identify themselves as non-Indian, and they spend their lives immersed in the non-Indian world. Somewhere in their non-Indian DNA, a few nonstandard strands make them Indian.

According to the NativeCelebs fans, this tiny amount of Indian blood qualifies them to assume Indian roles. So we have Johnny Depp playing Tonto and Taylor Lautner playing Jacob Black. It also qualifies them to talk and act like (their version of) Indians. So we have Jessica Simpson claiming her right to say "Indian giver" and Miley Cyrus rocking her dreamcatchers.

Oprah WinfreyLike the other people I've named, Oprah has no knowledge of or connection to a tribal culture. I'd call her a non-Indian with a small amount of Indian blood. But according to the one-droppers, she's an Indian.

Oprah has less Indian blood than Johnny Depp or Miley Cyrus, but more than Taylor Lautner or Jessica Simpson. When she was younger, Oprah proved her acting talent in several roles. Therefore, let's cast her in the next Hollywood movie as an Indian.

She's a bit too old to play Pocahontas or Sacagawea, but she can play the wife of a famous chief. Or Lozen, the warrior woman of the Chiricahua Apache. Or a modern Indian woman such as Wilma Mankiller.

Why not? She looks and acts as much like an Indian as the other performers I've named. She knows as much as they do about being an Indian. And most important, she has roughly the same small amount of Indian blood.

Does anyone doubt that Hollywood can and should cast Oprah as an Indian woman? If so, let's hear your case. Make sure you explain why it's not okay for Oprah to play an Indian, but it is okay for Depp and Lautner. 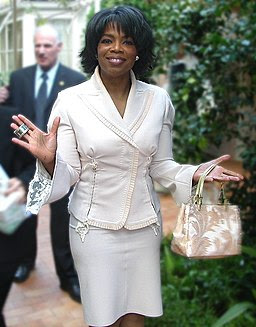 And what if your a full blooded Indian, but have no native culture?

This article feels a bit euro-centric, wanting everything spelled out on paper (and probably signed by some authority too). Native people generally know and recognize one another and by contrast can tell when someone's not on the level. No DNA tests needed.

The museum I volunteer for has a new exhibit by the way, Black Indians.

I know there are black Indians, Jilvsgi. I've written about them many times. But these are people who have studied and embraced their Native side for years. They aren't people who take a DNA test, discover a small amount of "Indian blood," and declare themselves Indians.

Most Indians don't recognize Oprah Winfrey, Taylor Lautner, Miley Cyrus, or Jessica Simpson as Indians. Some Indians recognize Johnny Depp, but not that many. By the recognition standard, they aren't Indians.

I'm sure DNA tests are approximations based on sorting out a complex mixture of genes, Anonymous. I doubt they can isolate the exact number of ancestors from one race or another. Therefore, I wouldn't expect the results to be as precise as 50%, 25%, 12.5%, etc.

I'd consider anyone who's full-blooded an Indian regardless of his or her culture or lack thereof. For more on the subject, see "Actual Indian" Defined.

Good points, Rob! I think you captured the heart of the issue there. What do people do with the information they receive?

And as you responded to anonymous concerning the DNA tests, I've heard that when someone scores low on any category that it can sometimes be "genetic noise". So, really it's very hard to assign a percentage let alone have a great amount of faith in its accuracy.

I do think Taylor Lautner is gaining acceptance among the Native youth though! ;o)