By Austin ConsidineComment:  These Britishers could lounge or camp in any kind of tent-like structure. So why Plains Indian tipis?

My guess is the same as it was the last 50 or 100 times someone appropriated Native cultures. Tribalism is trendy. It's "cool" to say you're getting in touch with your roots, the spirits, or the earth via a tipi. It makes you seem more authentic and real and less status- and wealth-oriented.

There's nothing terribly wrong with lounging in tipis as long as you don't dress up and pretend to be Indians. But that's the problem. Some people take their trendy tribalism one step too far. Then you get affronts like the TeePee Games website and the Irish "Indians" showband. Or in Germany, artists who think showcasing Chief Wahoo makes some sort of cultural statement. Or in the US, wannabes who think wearing a headdress makes them wild and free like an Indian.

On short, hipster appropriation becomes hipster racism. Which is why critics are watching these people and calling them out if they step over the line.

For more on tipis, see Wigwam Motel as Historic Icon and The Pee-Pee Teepee.

Below:  "Tepees at the Glastonbury Music Festival in Great Britain." 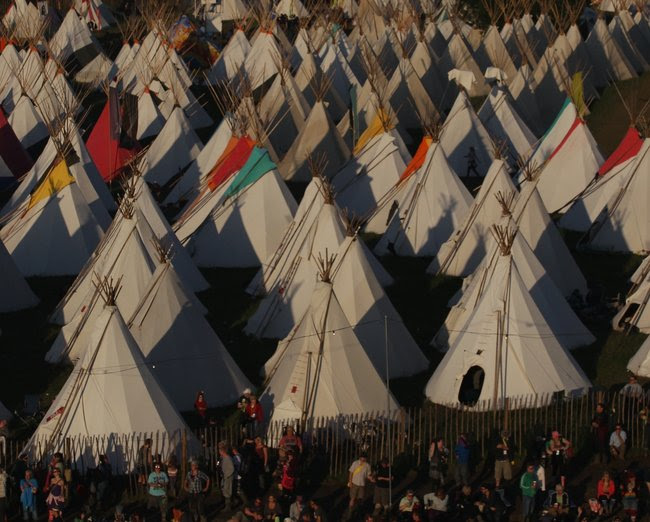 Email ThisBlogThis!Share to TwitterShare to FacebookShare to Pinterest
Labels: tipis