I've discussed how dressing up as Indians (redface) is similar to dressing up as blacks (blackface) many times. In her Native Appropriations blog, Adrienne Keene explains why we tolerate this practice.

First she posts lots of images to show how "normal" redface is: 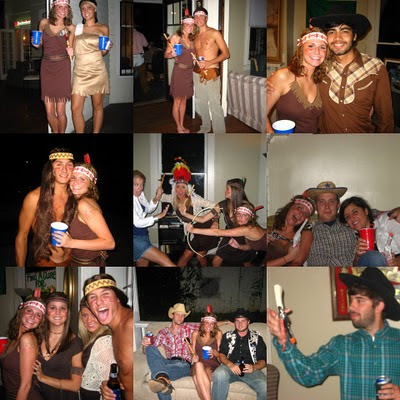 Then she explains why we treat redface differently from blackface:Comment:  I think Keene and Kimberly Tallbear have nailed the difference. As America expanded westward, we appropriated Indians as our symbol for everything we admired in ourselves. Indians were rugged individualists, noble warriors (when necessary), salts of the earth, etc. and so were we.

By dressing up and calling ourselves Indians, we softened the guilt over our genocidal actions. While the real Indians "vanished," we took their place figuratively as well as literally. "They're Indians, we're Indians," the thinking went. "This land is their land, this land is our land."

And a few decades later: "They're gone, we remain. We inherited America from them. We didn't do anything wrong; we simply outlasted them. That some 'species' go extinct and others replace them is the natural order of things. Now we're the owner/occupants of America--the new 'Native' Americans."

And "playing Indian" reinforces that message: "We're them and they're us. We 'honor' them for holding the land in escrow until we could use it productively. They were noble caretakers in their own savage way. Now that they're gone, we owe it to them to preserve their our country."

The fallacies in this thinking are obvious. One, the Indians weren't predatory animals like wolves or bears who had no claim to the land. Two, they didn't give up their land willingly. We stole it from them by breaking the treaties we signed. Three, they aren't gone. They're still here, like any other people, and still demanding their legal rights. The "we innocently took over from them" narrative is utterly false.

For more on why these events are wrong, see: