Wikipedia also notes the four Inuit who accompanied Peary and Henson: Ootah, Egigingwah, Seegloo, and Ooqueah. As noted in Icy Indigenous Expeditions, they should get co-credit for accompanying the foreigners and, more important, teaching them how to survive.

Not only did the Inuit teach and guide them, but they apparently provided a whole support system. They fed, sheltered, and comforted (slept with) the strangers. It's a lot easier crossing foreign territory when you have a whole village helping you out.

When we talk about explorers like Peary, we should compare them to someone like Neil Armstrong. Yes, he was the first man on the moon, but he didn't do anything noteworthy by himself. He was the culmination of decades of work, supported by an infrastructure of thousands. It's more correct to say the space program put a man on the moon and it just happened to be Armstrong.

Same with Peary. With all the people funding him and all the Inuit helping him, he doesn't deserve much of the glory. But we do glorify lone explorers like him, of course. Many Inuit may have reached the North Pole, but it doesn't count unless a Westerner did it. And he gets the credit even though the Inuit kept him alive.

Meanwhile, I can just imagine Peary sweet-talking the Inuit into accompanying him back to America. "No, you won't catch horrible diseases you've never been exposed to. We'll take care of all your wants and needs while you're with us. We'll return you promptly to your homes. And if you die, we wouldn't dream of putting your bones on display like zoological specimens."

It's a good example of Western civilization's Indiana Jones/Froot Loops mentality. If we want some Inuit people and a meteorite to study, we take them. In the case of the people, we'll make promises to them equivalent to lies, or simply kidnap them. It doesn't matter if they get sick or die and never return. What matters is what white men want!

No doubt this history is well-known to Arctic aficionados, but a lot of it is new to me. So I'm sharing it.

For more on Arctic explorers, see:

Frankenstein's monster = Eskimo
Charles Dickens on "Esquimaux"
The "Other" and The Terror
The doomed Franklin expedition
Review of Arctic Passage: Ice Survivor 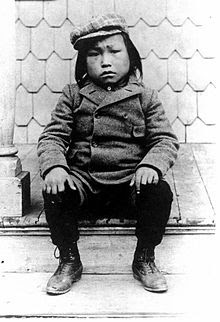