Colonial scars run deep in BoliviaComment:  For more on the subject, see Peace Prize for Morales? and Chavez and Morales, friends of Natives. 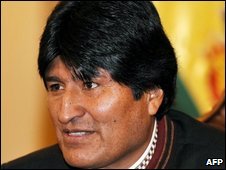 Email ThisBlogThis!Share to TwitterShare to FacebookShare to Pinterest
Labels: Bolivia